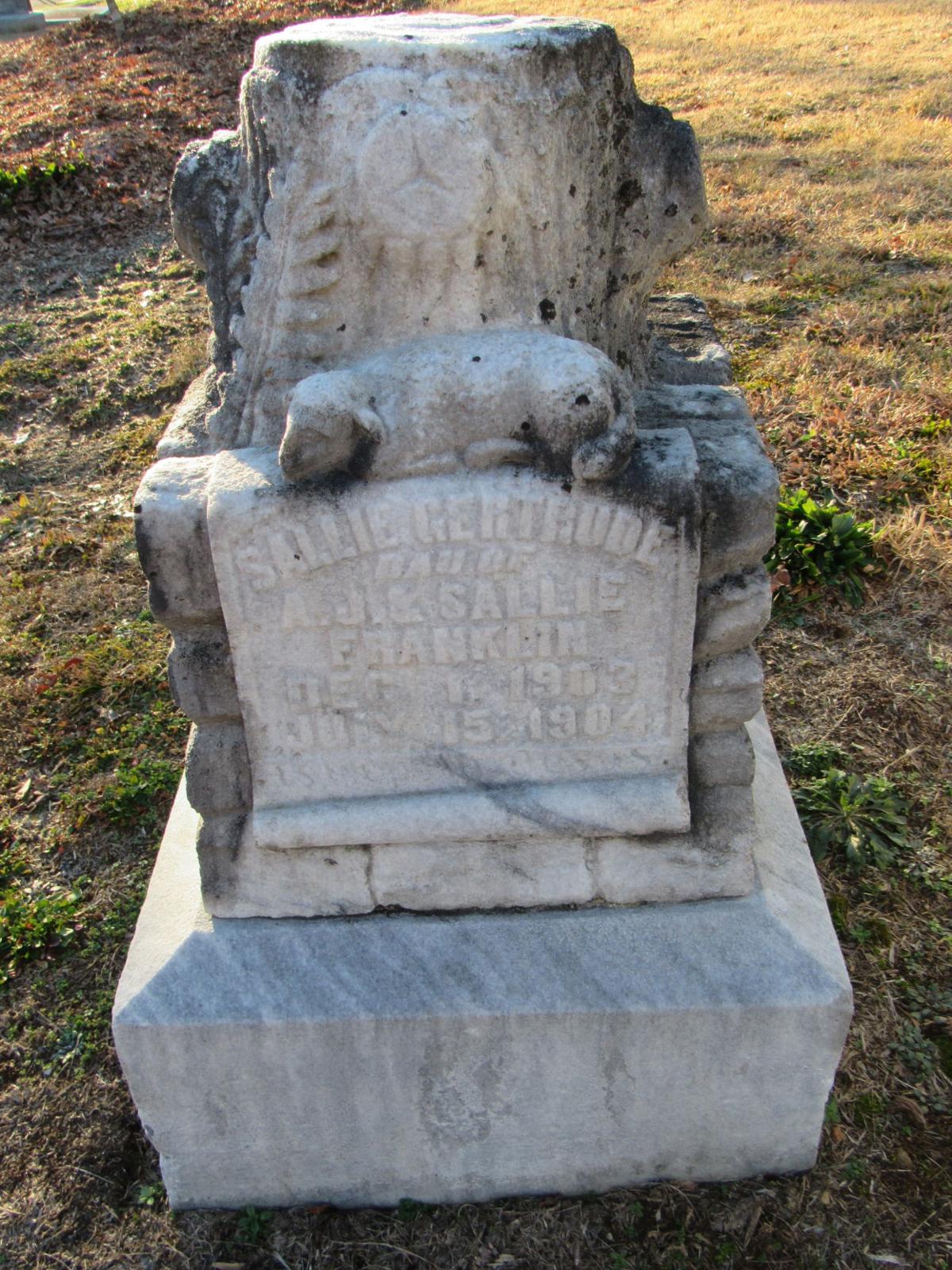 A child’s grave with what is known as a tree stone. The “tree” was cut short as was the life of six month old Sallie. The lamb is a symbol of innocence often used on children’s gravestones. / Photo by Karen Marcus 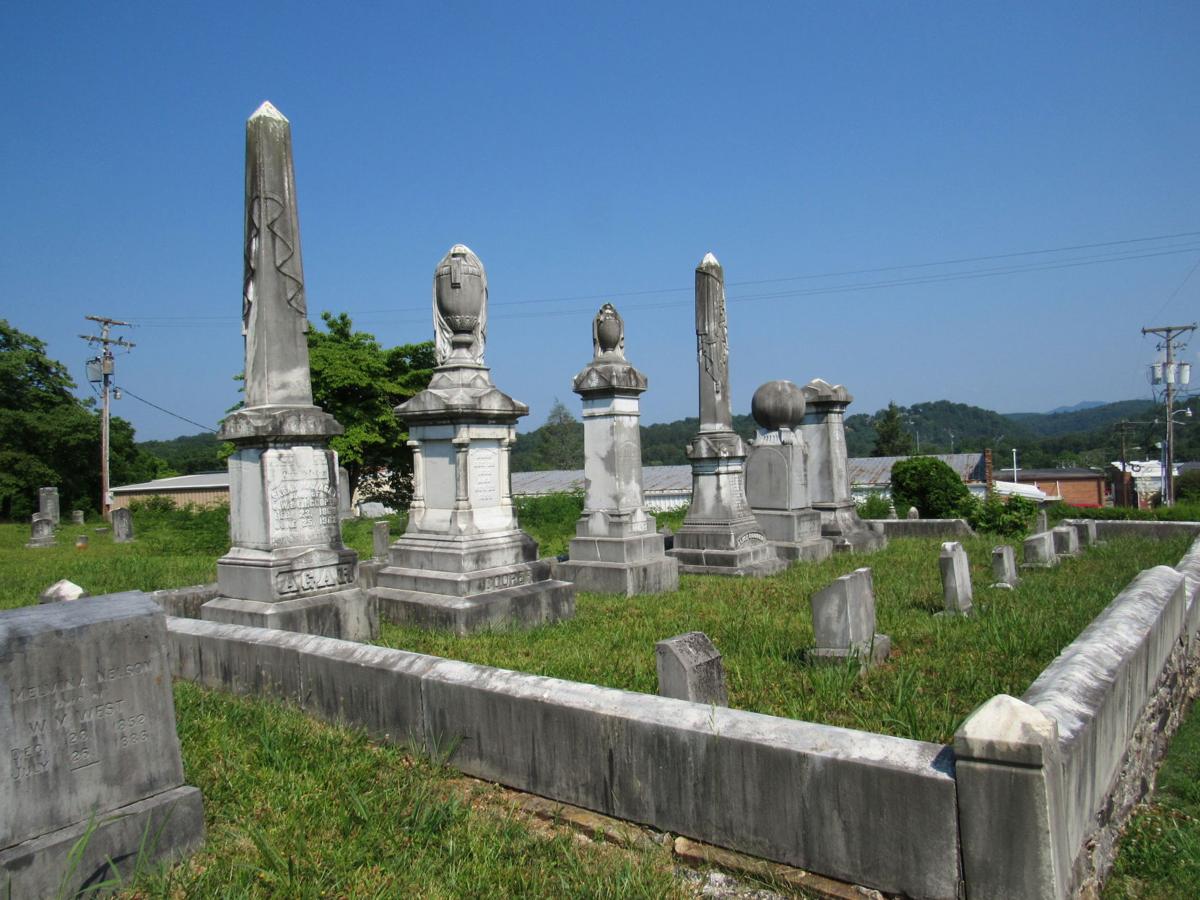 As art and architecture evolved, people looked to ancient Rome and Greece to look for designs for their gravestones. A predominant image of the time was an urn, an Imperial Roman vessel used to contain ashes. / Karen Marcus photo 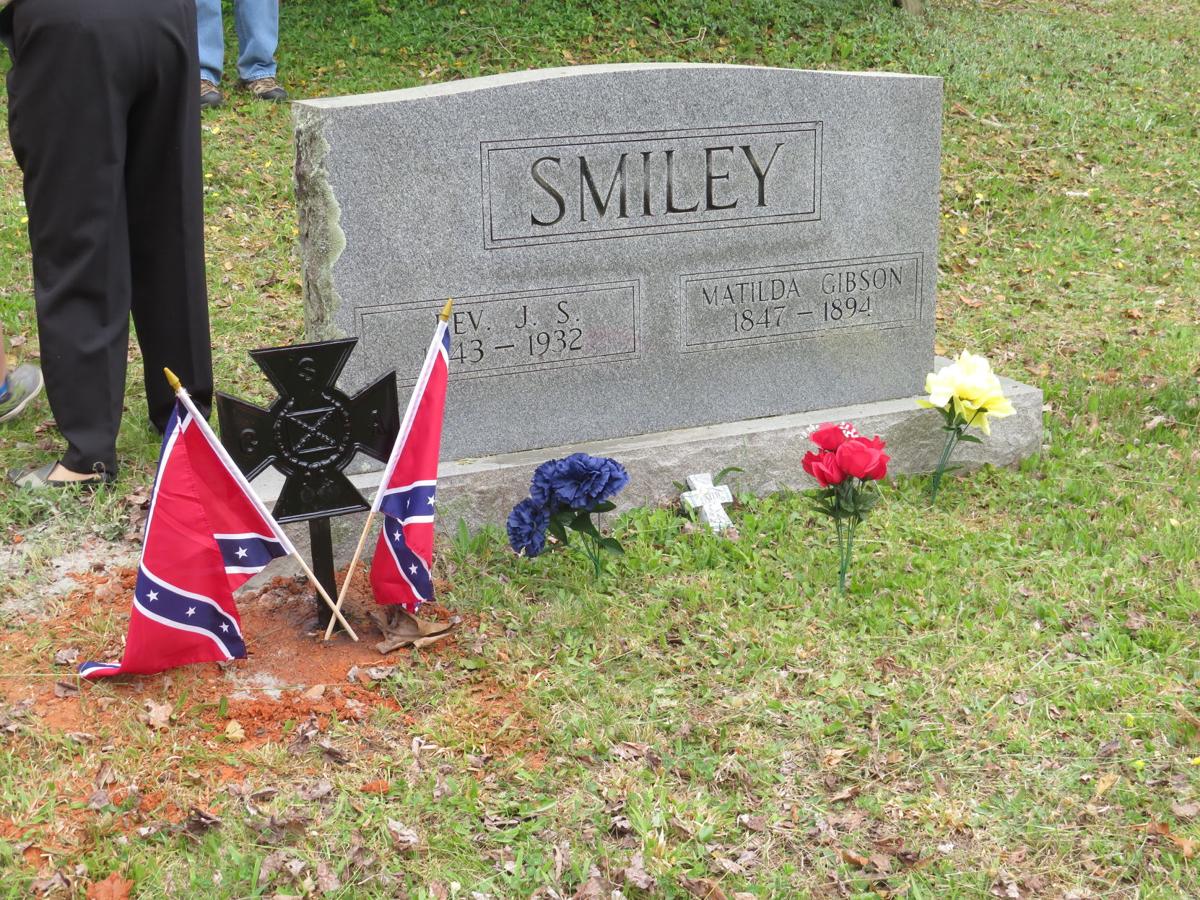 The Daughters of the Confederacy began honoring its soldiers in the early 20th century with the “Southern Cross of Honor.” / Karen Marcus photo

A child’s grave with what is known as a tree stone. The “tree” was cut short as was the life of six month old Sallie. The lamb is a symbol of innocence often used on children’s gravestones. / Photo by Karen Marcus

As art and architecture evolved, people looked to ancient Rome and Greece to look for designs for their gravestones. A predominant image of the time was an urn, an Imperial Roman vessel used to contain ashes. / Karen Marcus photo

The Daughters of the Confederacy began honoring its soldiers in the early 20th century with the “Southern Cross of Honor.” / Karen Marcus photo

Karen Marcus was invited to the Old Buncombe County Genealogical Society to give a presentation titled Whispers in the Cemetery – The Stones Tell All. Gravestones carry messages portraying a person’s life or what they wanted others to remember. Epitaphs, symbols and art reflect religious affiliation, occupation, social status and other aspects of their life. A native of Swain County, NC, Marcus shares some of the history and symbols from cemeteries in Western North Carolina and tells how they can help solve genealogical mysteries.

One never knows from where inspiration might come. The “genealogy bug” bit Marcus in the 1980s when she was working at the Federal Archives and Records Center in Fort Worth, Texas. “I came back to North Carolina and started finding the graves of my ancestors. That’s when I joined the Old Buncombe County Genealogical Society,” she said.

“You can walk through that gate at any moment in time…and be transported back in time,” Marcus said. “And for just a few moments have a glimpse of the past and relive history. When you walk through a cemetery looking for information about people, the stones will whisper to you and share their secrets and tell you much about the deceased. We just have to learn to hear those whispers and understand what they mean.”

The history of stone grave markers goes back thousands of years. In October 2017 a tombstone was found from an excavation in Luxor, Egypt.

“The stone was limestone decorated with a cross and a Coptic inscription on it. It measured about 1.2 feet by 3 feet, and it was recently determined that the stone belonged to a ten year old girl named Takla who died somewhere between the 7th and 10th centuries AD,” Marcus said.

The Puritans, one of the earliest groups to come to the New World were a primary influence on early gravestones.

“In New England in the 1600s they used simple wooden or stone grave markers because of the belief that carving anything on them was a violation of the Biblical commandment against creating graven images,” said Marcus.

“The winged death’s head was among the first grave designs used, and was a more neutral symbol to remind one of the surety of death and the hope of resurrection,” Marcus said.

Life was changing, it was the age of enlightenment. It was a time of breaking away from religious authority. Converts began the first “Great Awakening,” which started around 1720 and went through about 1745. Gravestones at this time began to reflect a hopeful afterlife and a peaceful and eternal rest.

The creators of gravestones sometimes signed their work.

“Back then stonecutters were a trade, and they had guilds. Early stones were often flat either upright on a block or in the ground. Rectangles often had a rounded top. Some of them had previously been used as ballast on ships.”

Marcus said burial customs had bodies buried with the head to the west, and the feet to the east so that the sound of the cock’s crow on the Day of Judgment the resurrected dead would rise to face the dawn.

The inscription in older cemeteries was on the side facing south so the visitor would not have to walk on the grave to read it. It wasn’t until the 20th century that the inscription was customarily placed on the side of the stone facing the grave.

“As art and architecture evolved, people looked to ancient Rome and Greece to look for designs for their houses, public buildings, and gravestones. A predominant image of the time was an urn, an Imperial Roman vessel used to contain ashes. Monuments became larger. Obelisks, columns, and other ornamental forms were widely used in the 19th century monuments,” Marcus said.

The wide base and narrow top of an obelisk symbolizes how a soul reunites with God at death.

When Queen Victoria’s beloved Prince Albert died in 1861 she bitterly mourned his passing.

“The Queen of England was the trend setter. Because she mourned, people followed her tradition. Mourning became a very specific process,” said Marcus.

Death customs developed including a deathwatch, and draping things such as mirrors in black. It was improper for the spouse of the deceased to marry until an appropriate period of mourning had elapsed.

Gates ajar became a popular motif on tombstones from the 1870s through the 1930s. In 1868, Elizabeth Stuart Phelps published a book entitled “The Gates Ajar.” It is the story of a young woman grieving the loss of her brother, who was a soldier and died in the Civil War.

“She was having a hard time dealing his death, which seemed so senseless. Her aunt came to visit and gave her comfort by telling her of some very different beliefs that she had concluded about heaven. She was told that the gates to heaven are not closed but were ajar.

“Since these gates do not close behind the dead, departed souls are able to pass back and forth between Heaven and earth. This way, loved ones who have gone on before can observe friends and family members who are still among the living,” Marcus said.

As railroads spread it became possible to ship high quality granite and marble across the country. “It became a mark of status to have a grand monument with lengthy poetic epitaphs and meaningful symbols engraved upon them. This was the golden age of American memorials,” Marcus said.

In 1897 Sears, Roebuck & Co. included cemetery-related products such as grave guards and arches for sale in their catalogue. Grave guards with an iron framework and coiled tassels on each post were used to deter students from digging up cadavers for dissection at medical schools. By 1902 Sears had established an entire memorial department.

Bed headboards were sometimes used to mark graves, as was the case with Wild Bill Hickok’s grave.

“Iron bedframes were used in the belief that the deceased would be more comfortable in the afterlife if it was like sleeping in their own bed. Metal beds provided a means for people who could not afford tombstones to pay their respect to their loved one without all the cost of traditional grave markers. ‘Bolster stones’ were thought to resemble pillows, again for comfort in the afterlife.”

There is much symbolism with a variety of meanings that involve hands in funerary art.

“A hand pointing up means that the soul of the deceased has risen to heaven. If there are two fingers, the person was probably a member of the clergy. A hand pointing down could be indicative of the hand of God reaching down to take the person home, or that the person died unexpectedly. A broken chain symbolizes the broken link in the family’s connection,” Marcus said.

The cross is a reminder of Christ’s resurrection and the eternal life of the soul.

“The setting sun alludes to the ending life, and an open book means it is open to God or to the world, and it can also mean that a life was cut short. With the book open the deceased was robbed of getting to the end of the book.”

Lilies are a symbol of innocence, mercy, purity, and chastity. “A sheaf of wheat may mean a long and fruitful life, commonly over 70 years. It can represent a farmer, or a baker, or Christ as the bread of life. It also denotes immortality and resurrection as a harvested grain. Ivy symbolizes immortality, eternal friendship, and everlasting love where the loved one is gone but not forgotten. Palm fronds represent victory over death.”

Early Christians used the anchor as a disguised cross, and as a marker to guide the way to secret meeting places.

“An upside down anchor means the person died at sea. The crown is a symbol of sovereignty, honor, glory, victory, and the crown of Christ’s righteousness. An oil lamp is a symbol of wisdom, faith, and holiness. The flame of the lamp dispels darkness as the flame of knowledge dispels ignorance,” Marcus said.

In the 1940s, stones began to change and fewer symbols were used. Today, we see the symbolism revisited on new tombstones. The next time you walk through a cemetery take time to look at the symbols, especially on older gravestones.