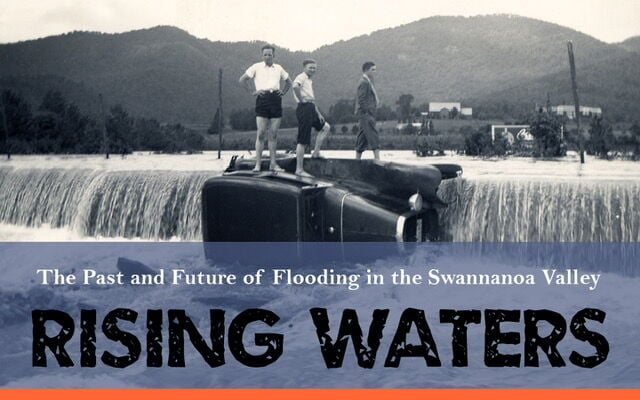 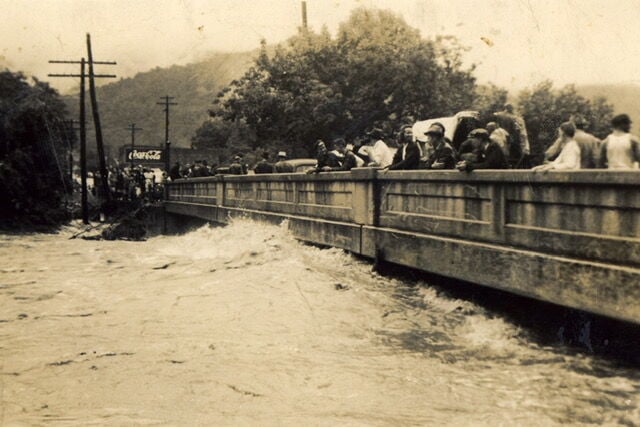 This photo depicts 1940 flooding on the Swannanoa River at the Whitson Ave. Bridge 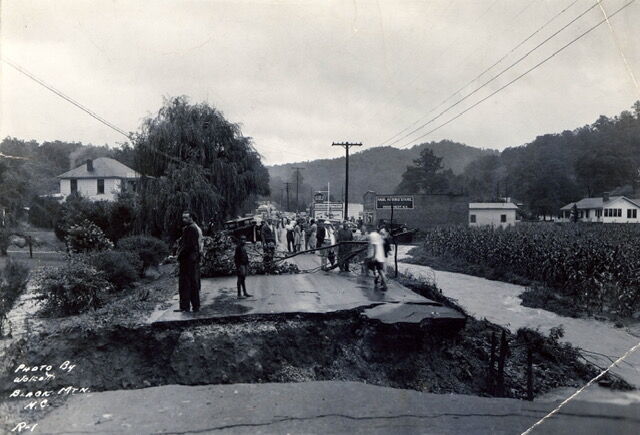 This photo shows flooding in 1940 at Ridgecrest.

This photo depicts 1940 flooding on the Swannanoa River at the Whitson Ave. Bridge

This photo shows flooding in 1940 at Ridgecrest.

For residents of Western North Carolina and the Swannanoa Valley, flooding is a natural and often frightening hazard that comes along with living in the mountain region.

Valley residents may recall the flood of May 2018, which forced some locals to evacuate their homes, or the September 2004 flood caused in part by tropical storm Frances that damaged businesses, tore out trailers and washed out roads.

Most recently, in late August of 2021, the heaviest rainfall in Buncombe County in over 50 years flooded parts of US-70 and caused the waters at Black Mountain’s Lake Tomahawk to overflow their banks.

Major floods in the region have been recorded as far back as 1791, but today, global climate change is increasing the frequency and size of storms, making floods even more hazardous.

This exhibit highlights over 200 years of flood history in the valley while examining the causes of flooding and what can be done to reduce the impacts of future floods. Included in the displays will be large scale photographs of major floods in the valley alongside interpretive banners from the N.C. Department of Natural and Cultural Resources (NC DNCR) detailing the history of the Great Flood of 1916, which caused the deaths of Swannanoa Valley residents and washed out an estimated 30 miles of railroad tracks between Old Fort and Asheville.

Drinks and refreshments will be served, and visitors will be able to peruse the new “Rising Waters” exhibit.

Afterward, at 7 p.m., a screening and discussion of Come Hell Or High Water, Remembering The Flood Of 1916, a film by award-winning filmmaker David Weintraub, will take place a few blocks away at the White Horse Black Mountain.

The event will begin with music performed by folk and bluegrass musician David Wiseman, whose tribute song is featured in Come Hell or High Water. After the screening, Weintraub and community members will have a short discussion sharing memories of floods in the valley.

Come Hell Or High Water is a documentary exploring the Great Flood of 1916, a tragedy that remains legendary in Western North Carolina. In mid-July, 22 inches of rain fell in a 24-hour period in the region. In many places, the French Broad was 17 feet above flood stage and the Swannanoa River was a mile wide.

This year still evokes powerful memories in many old-timers’ family histories. But what concerns many is the reality that WNC is a flood prone area and such a disaster could repeat. Given that the Great Flood led to thousands of mudslides and landslides, causing extensive damage at a time when no one lived on the side of mountains, the worry is that should a flood of similar proportions occur today it would likely be more devastating.

Tickets for the screening are $15 for museum members, and $20 for general admission. Tickets and more information can be found at www.swannanoavalleymuseum.org/highwater. Museum staff can be contacted at 828-669-9566 or swannanoavalleymuseum@gmail.com.