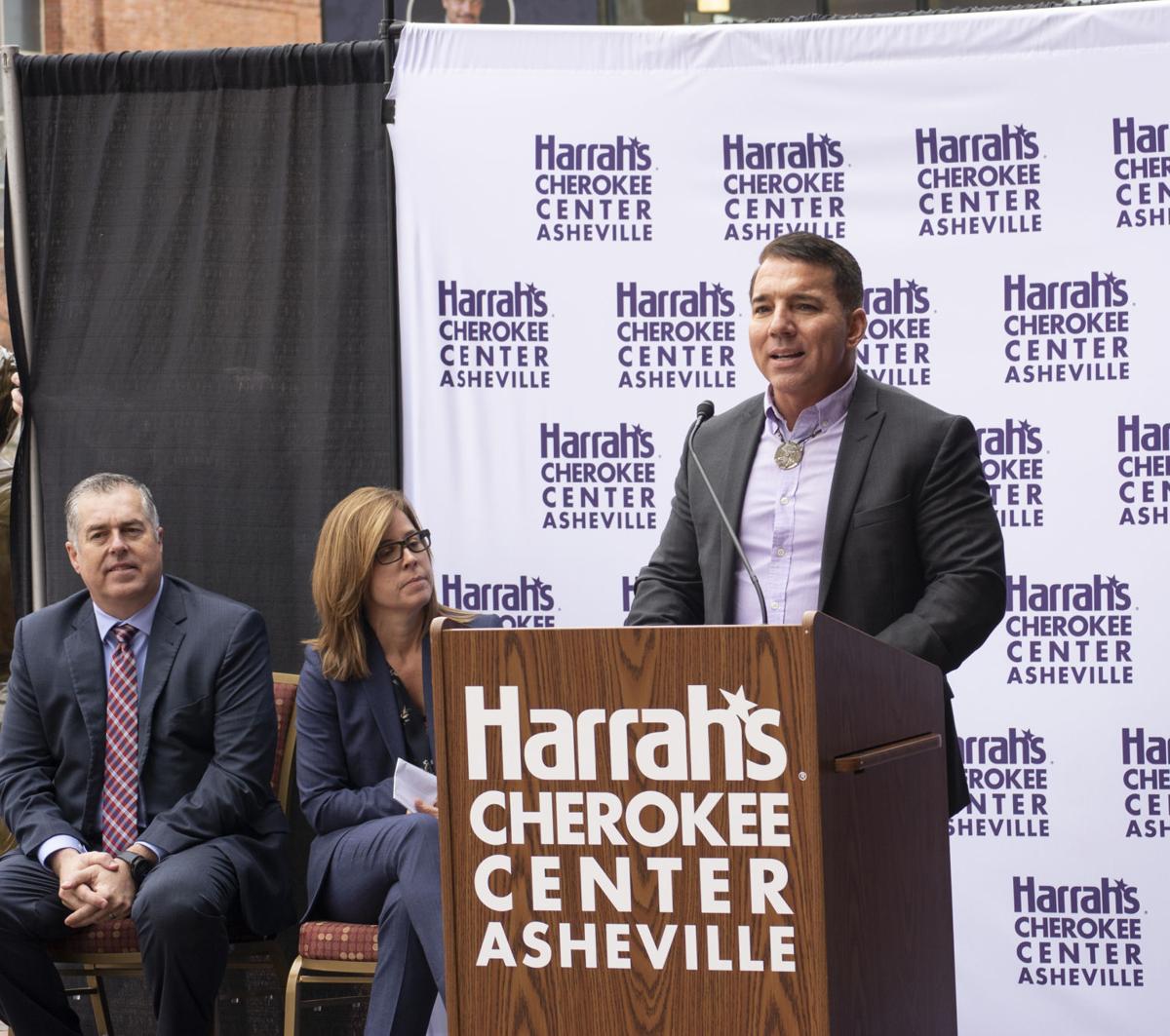 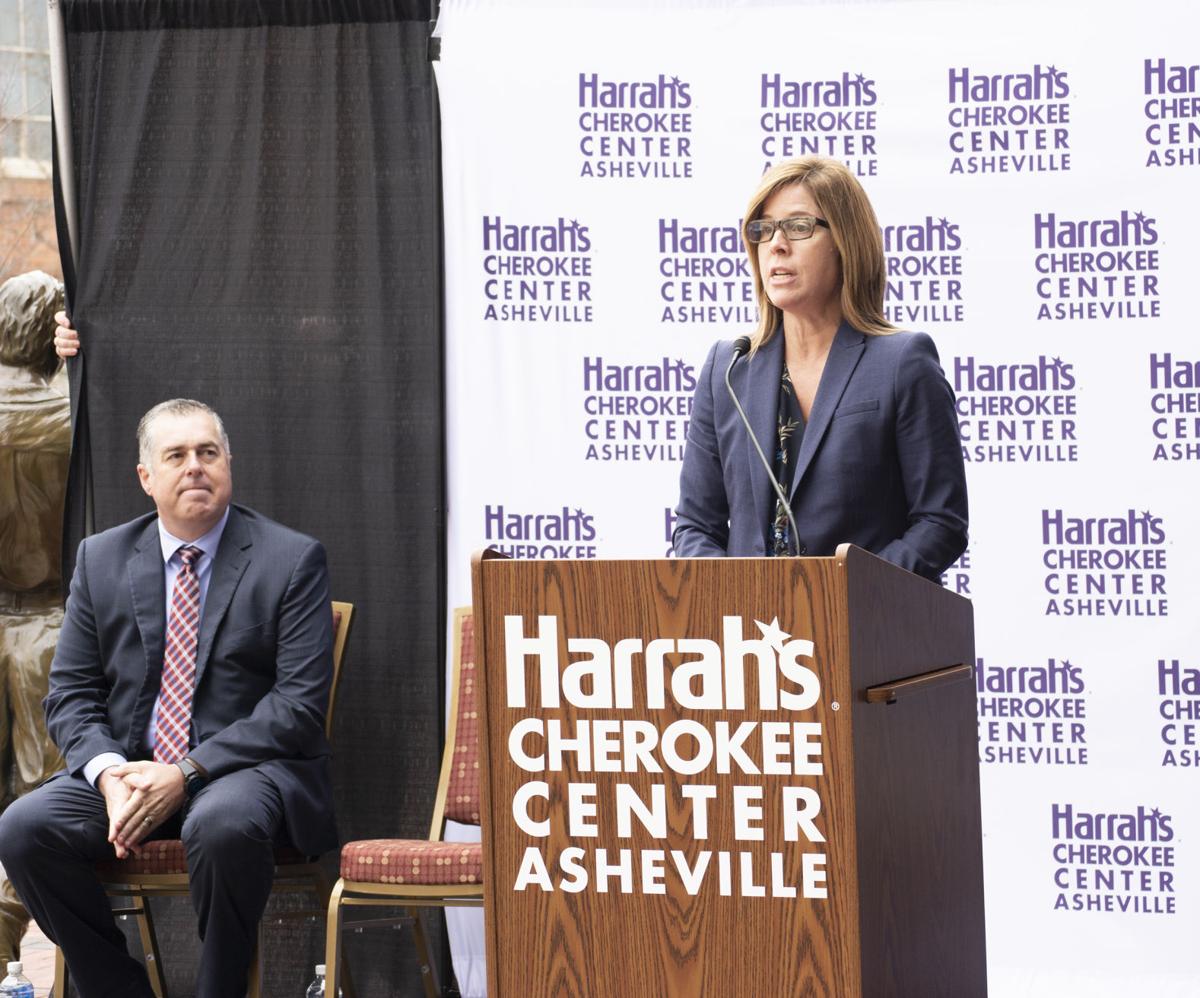 Asheville Mayor Esther Manheimer praised the collaborative efforts between the EBCI, Harrah’s Cherokee and the city of Asheville during the Jan. 10 renaming ceremony. 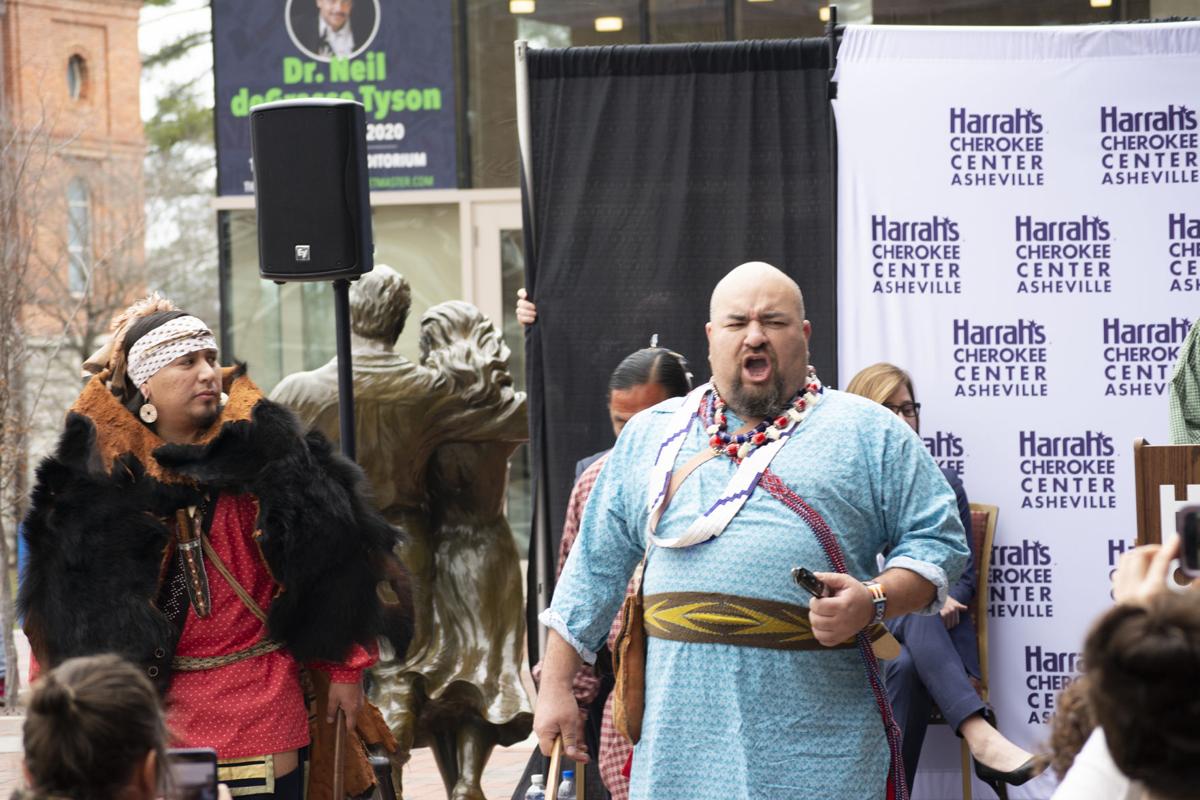 Members of the Warriors of Anikituwha performed a brief ceremony following remarks from the various partner agencies at the Jan. 10 unveiling of the Civic Center’s new name. 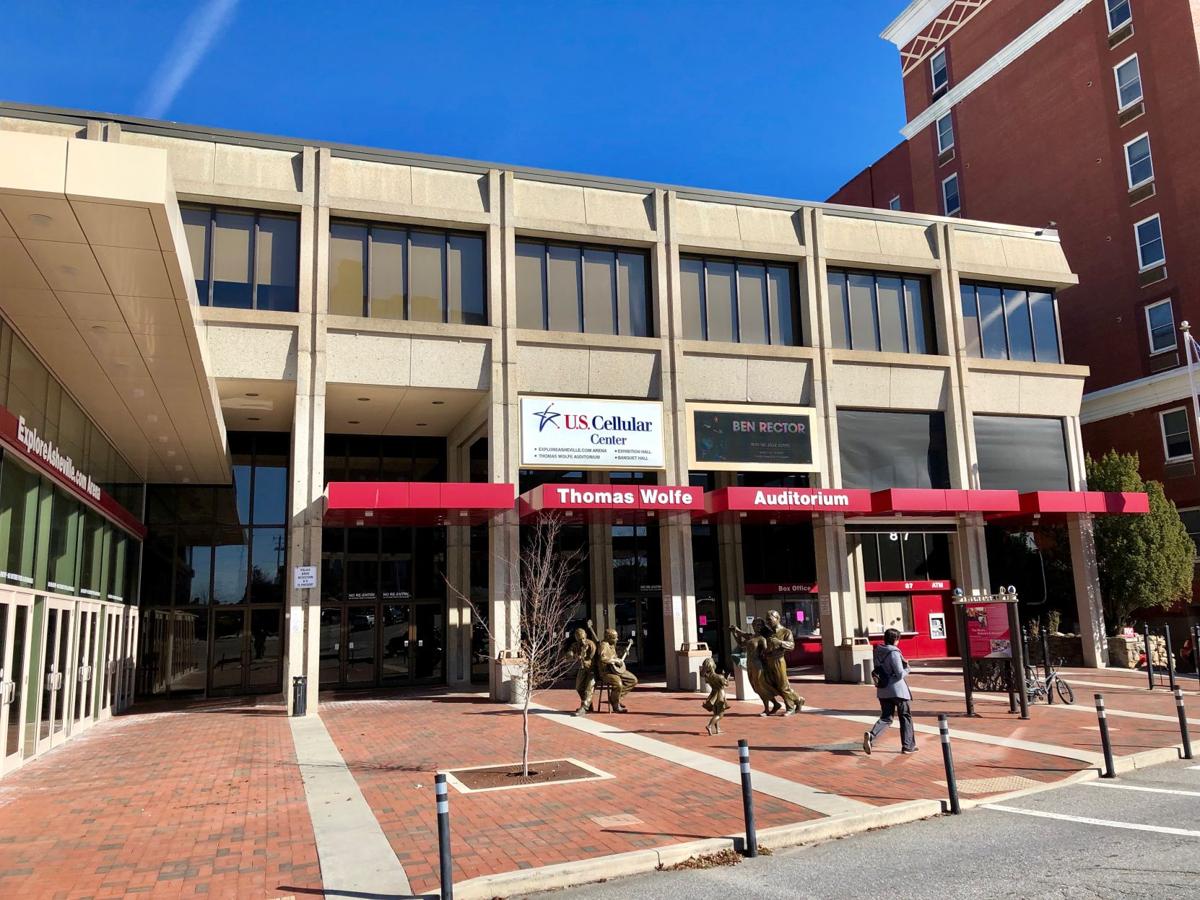 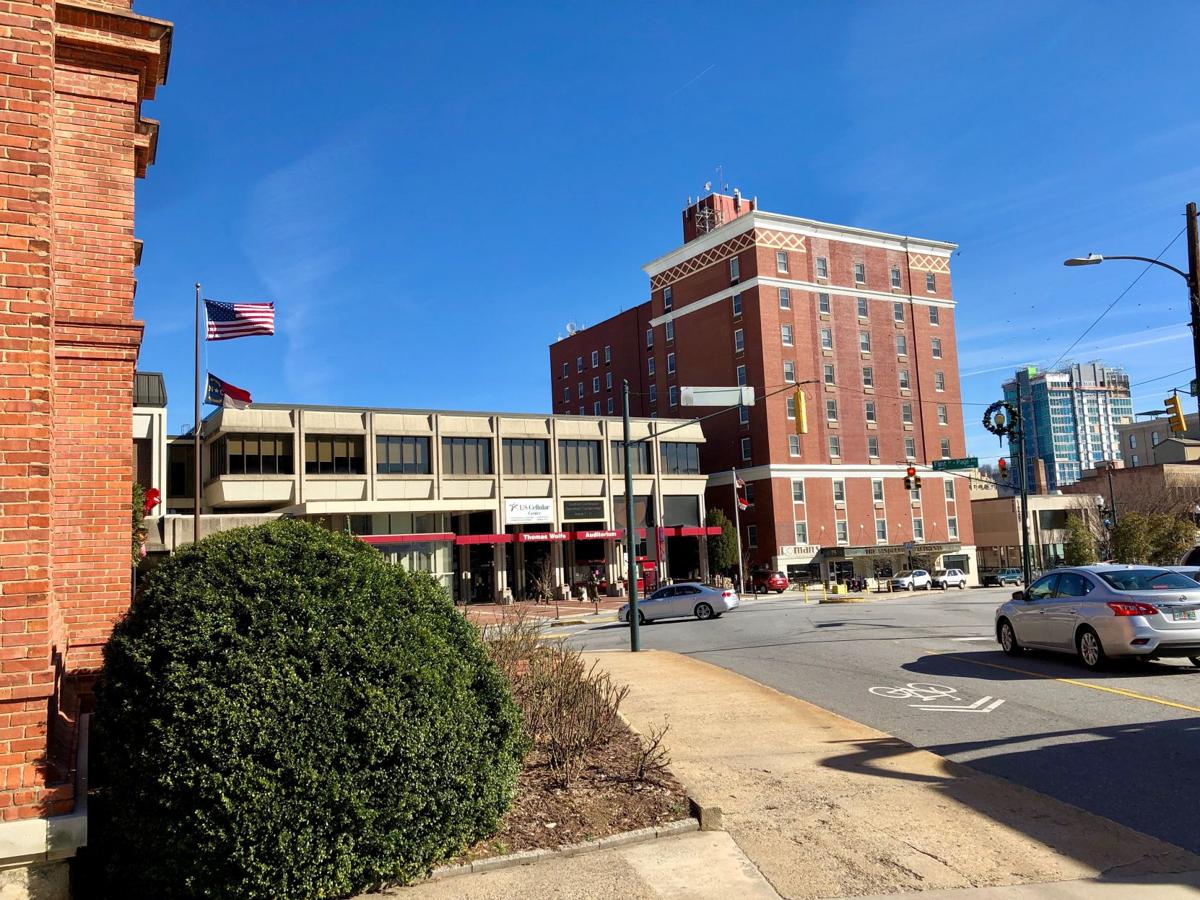 Asheville Mayor Esther Manheimer praised the collaborative efforts between the EBCI, Harrah’s Cherokee and the city of Asheville during the Jan. 10 renaming ceremony.

Members of the Warriors of Anikituwha performed a brief ceremony following remarks from the various partner agencies at the Jan. 10 unveiling of the Civic Center’s new name.

Would a venue by any other name still sound as sweet?

A new era for the Asheville Civic Center kicked off on Jan. 10, marking the official changeover to the new name for the building — the Harrah’s Cherokee Center Asheville.

Representatives from the city of Asheville, the Eastern Band of Cherokee Indians and Harrah’s Cherokee gathered outside the newly renamed facility to commemorate the occasion, which represents a great deal more than just a new name for one of Asheville’s most iconic venues.

“This naming rights agreement between the city of Asheville and Harrah’s Cherokee is an incredible example of how our two organizations are stronger together,” said Chris Corl, general manager of the Harrah’s Cherokee Center Asheville. “Our partnership with Harrah’s Cherokee and the Eastern Band of Cherokee Indians will result in real change here at the facility, and this change will be enjoyed by all of our guests for many years to come.”

Corl said there will be a number of updates to improve the facility in the immediate future, as well as some longer term projects, made possible by the agreement.

By the end of summer, more than 1,700 square feet of high definition video display equipment will be installed, and Corl said there will be more audio and video equipment, public wifi and sound system enhancements made within the next six months.

The naming agreement will also provide the startup capital for a major renovation of the Thomas Wolfe Auditorium, providing much-needed improvements to the 80-year-old facility. Additionally, funds have been allocated to help with improvements to the Civic Center parking garage and up to $250,000 will go toward replacing existing signage and branding for the new facility name.

The initial discussion over renaming rights for the Civic Center began in July 2018, and the bidding process resulted in two options for the building — either an extension with former sponsor U.S. Cellular, Inc., or Harrah’s Cherokee Resort. In May 2019, the Asheville City Council voted 6-1 to accept the offer from Harrah’s Cherokee, a 5-to-10-year agreement worth up to $5.75 million.

During the renaming ceremony, representatives from the city of Asheville and the EBCI remarked on the many benefits that will arise from this partnership. Asheville Mayor Esther Manheimer commended Harrah’s Cherokee on demonstrating a desire to improve the Western North Carolina community and the resources available here.

“This commitment of nearly $6 million is an example of Harrah’s Cherokee’s commitment to our community and to Western North Carolina, and I hope we continue to have the opportunity to work together in the future,” she said.

”For the residents and visitors of Western North Carolina, this venue holds a very special place in their memories,” said Brooks Robinson, SVP & GM Harrah’sCherokee Casino. “This is a piece of Asheville’s diverse and vibrant entertainment scene that we are very proud to be a part of. We look forward to the continued success of this venue as Harrah’s Cherokee Center — Asheville.”

Richard Sneed, principal chief of the EBCI, echoed her sentiments, saying the EBCI and Asheville have been intrinsically linked for generations and this partnership builds on that foundation.

“Traditionally, the Cherokee people called this place ‘Untokiasdiyi,’ or ‘place where they raced,’ because Cherokee raced canoes on the river here,” Sneed said. “This region has long been where Cherokee would come to enjoy leisurely entertainment, and we’re pleased to continue that rich tradition by partnering with the city of Asheville and the Civic Center. The partnership will certainly be a catalyst for future economic growth, but more importantly it’s a symbol for the unique historical bond we share.”