You have permission to edit this article.
Edit
News
Arts
Health & Wellness
Living
40 Under Forty
Multimedia
Find Us
e-Edition
1 of 4 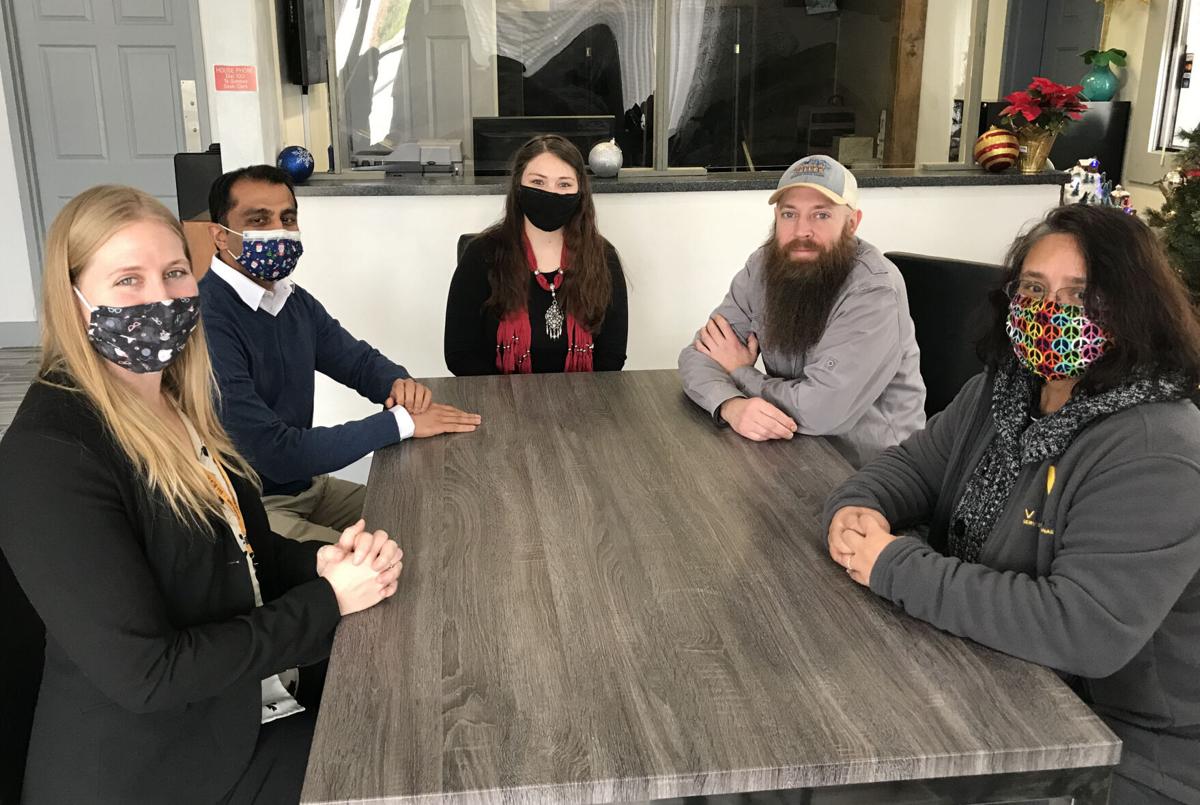 Clockwise from left, Deana Carr, Pratik Shah, Kendra Nicholson, Stephen Coffee and Jill Carter get organized before the start of a roundtable discussion on homelessness. 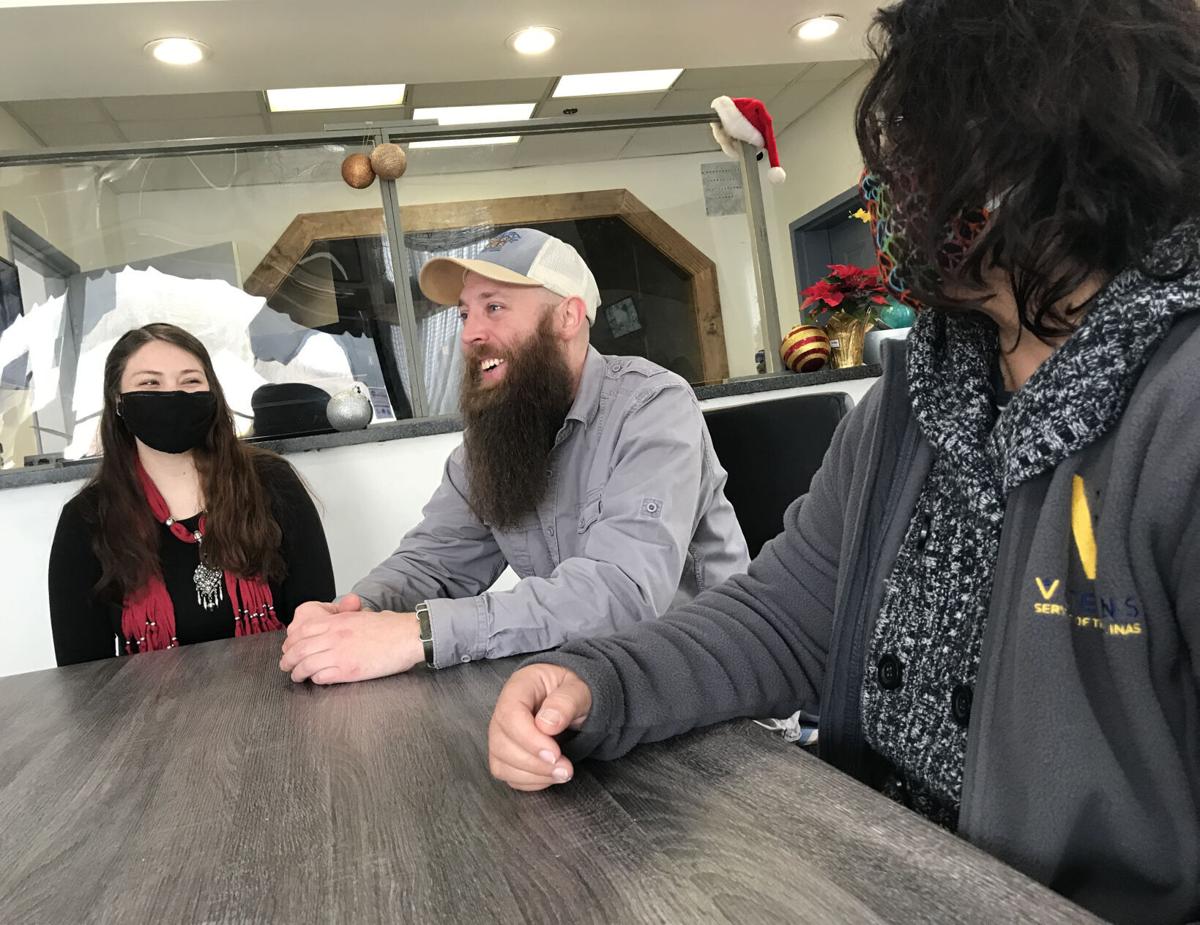 Kendra Nicholson, left, Stephen Coffee and Jill Carter share their experiences with a pilot homeless program organized through Veterans Services of the Carolinas and Super 6. 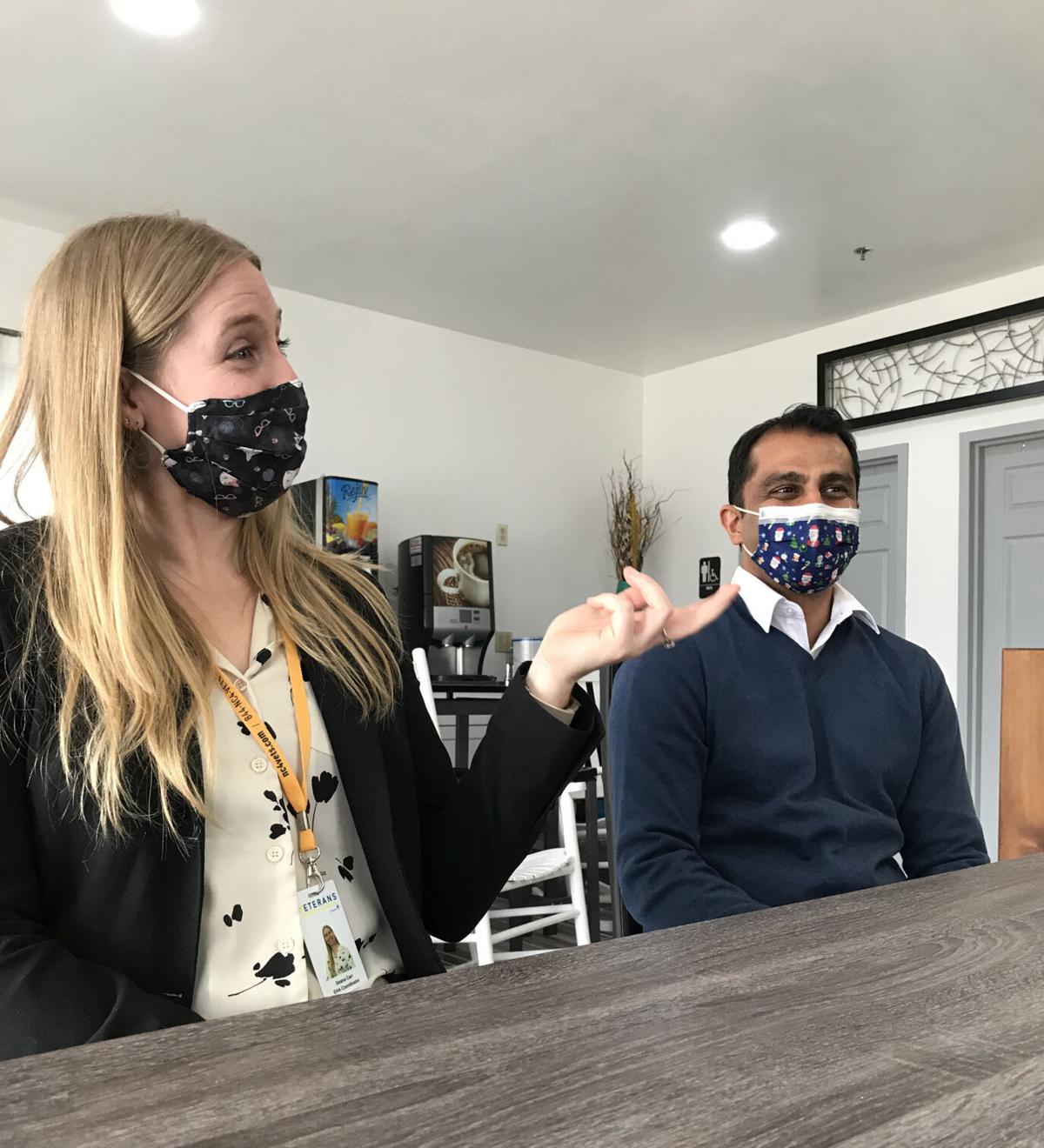 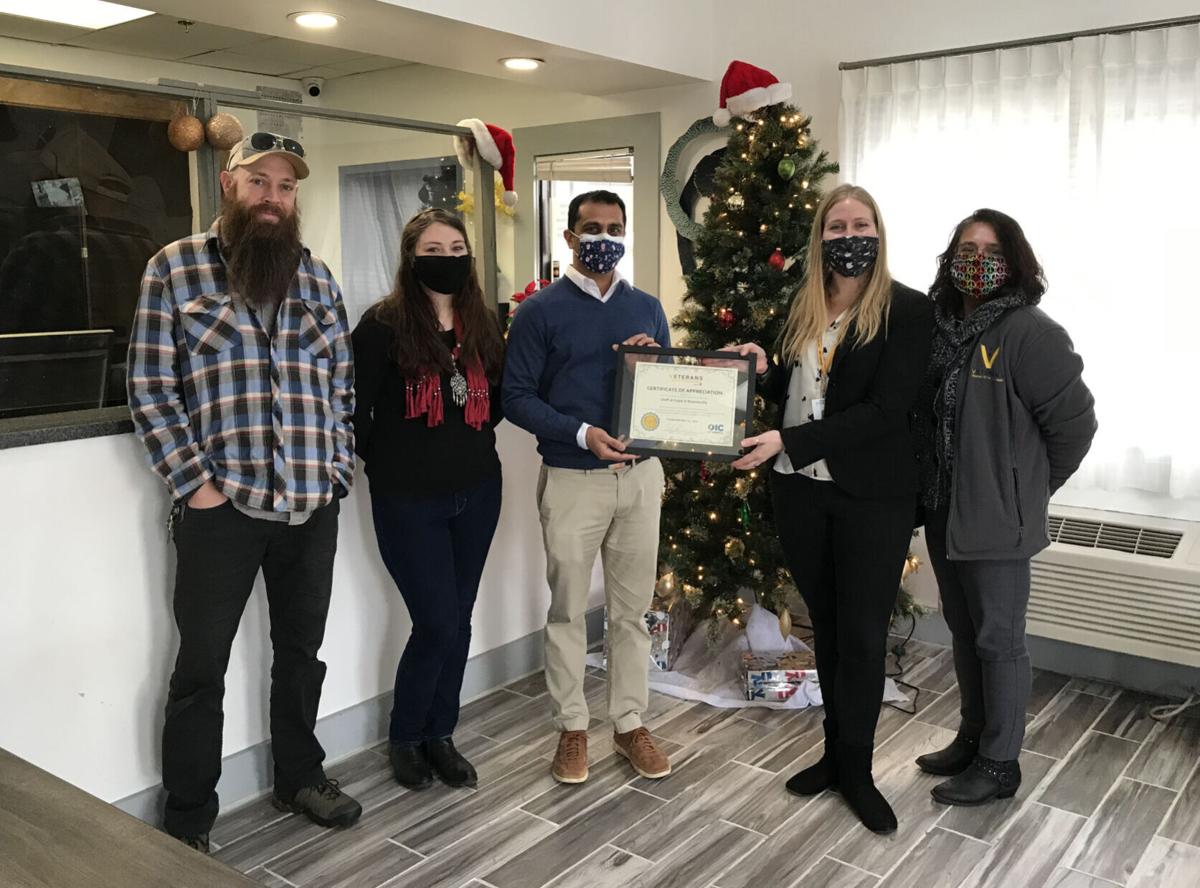 Fom left, Stephen Coffee, Super 6 hotel managers Kendra Nicholson and Pratik Shah, and Deana Carr and Jill Carter of Veterans Services of the Carolinas were on hand to recognize the Super 6 hotel in Waynesville for its participation in a housing partnership that enables homeless veterans to take advantage of emergency housing opportunities.

Clockwise from left, Deana Carr, Pratik Shah, Kendra Nicholson, Stephen Coffee and Jill Carter get organized before the start of a roundtable discussion on homelessness.

Kendra Nicholson, left, Stephen Coffee and Jill Carter share their experiences with a pilot homeless program organized through Veterans Services of the Carolinas and Super 6.

Fom left, Stephen Coffee, Super 6 hotel managers Kendra Nicholson and Pratik Shah, and Deana Carr and Jill Carter of Veterans Services of the Carolinas were on hand to recognize the Super 6 hotel in Waynesville for its participation in a housing partnership that enables homeless veterans to take advantage of emergency housing opportunities.

During the last week of 2020, four people affiliated with Veterans Services of the Carolinas, part of the Asheville Buncombe Community Christian Ministry (ABCCM), met to confirm how the organization’s work with homeless veterans changes lives.

Taking part in the roundtable were two representatives from ABCCM, one hotel manager and a former homeless veteran.

As each began to share their experiences with the fledgling hotel program, which centers around partnerships with local hotels that provide temporary rooms for homeless veterans enrolled with ABCCM, conversations ranged from serious to poignant and humorous to encouraging.

Around May, the idea to use hotels for temporary housing was the result of the dried up rental market created by the COVID-19 pandemic.

“Housing in a hotel is considered emergency housing while we’re looking for permanent housing,” said Jill Carter, a case manager with ABCCM, who currently works with 12 veterans in need of various assistance throughout the 74 counties that ABCCM serves. “So getting the partnership in housing is very difficult. I wish we had more of them.”

When approached with the idea to help provide emergency housing for homeless veterans during the pandemic, Super 6 hotel manager Pratik Shah said he had an open mind.

After all, COVID-19 had placed many restrictions on recreational travel and occupancy at the hotel was down.

At first, Shah said he had the same concern any business might about liability and how the program would work.

But the quick response and support from ABCCM staff calmed his initial thoughts.

“We were just trying to make it through this very weird time,” Shah said. “And we wanted to support the community in an effective manner. When you think about it, our job as a hotel doesn’t change. We are in the hospitality business and we offer a great customer experience. So, providing rooms to guests was what we were able to do.”

A side benefit of having veterans as hotel guests, Shah said was the fact that they watched over the place like it was their own.

“They are the first ones to tell us something weird is going on, and that is super helpful to us,” he said.

For Carr, the most challenging part of the partnership would be how to effectively deal with the billing.

“We’re a nonprofit and there’s a lot of paperwork that comes with that,” Carr said. “We’re required with every credit card swipe to report it for our federal grant.”

When the program started around May, Carr said she began to see her case managers’ credit card swipes maxing out, which meant other services soon would be impacted.

“My role was created to take this beast and make sense of it,” Carr explained. “So, I got on the phone with our partner hotels and with their help, worked to create a direct billing system that stopped all the credit card swipes and regulated the process. It gave me more time to process payments and there was less paperwork.”

Today, 14 hotels are on a direct-bill program with ABCCM and Carr hopes to expand participation now that the largest obstacle has been removed.

“Going to an electronic invoice takes the burden off case managers so they now have more time with the veterans and the invoices get paid,” she said.

‘This is their journey’

As the four representatives across the table began to open up about their experiences one voice jumped to the head of the line.

Back in February, when U.S. Marine Stephen Coffee found himself homeless through a series of “unfortunate experiences,” he took to the woods for shelter.

Over the next three months, his focus was on survival.

“We can be a difficult group,” Coffee said. “We are a subset of the population. But when you go through a crazy experience like war, there might be some things you might not have in common with people anymore. As a result, we can be cantankerous or quirky or difficult.”

But never beyond help, Carter, his case manager, was quick to reply.

“We talk about this a lot at the office,” Carter said. “We don’t leave veterans. We walk alongside them. We help them as best as we can, but this is their path.”

Introduced to Veterans Services through a friend, Coffee, who was ABCCM’s first participant in the Super 6 housing program said, all it takes is the desire to hear the message.

“I am living proof,” he said. “Some guys wash out of the program, but the parable from the Bible that I like the most is you leave the flock. You leave the 99 to chase after the one and if you can’t get him, oh well, OK, but at least you tried. If you can reach one out of 100 it’s worth it because the overflow from that one person impacts how many people as they travel through their day.”

Nine months after coming into the program, Coffee has transitioned out of temporary housing and now has his own permanent place. It’s taken a while to shift his mind-set from survival mode into a settled space, but he’s working on it.

The biggest gratification he takes away from his ABCCM experience thus far is twofold — the time he spends with his son and the way he sees himself.

“You can talk to my 7-year-old son and see the change through his eyes — just through the change in the quality of life that he now has. It’s not that Daddy’s coming over or Daddy’s going to pick me up. No, now he’s at Daddy’s house. He has his own furniture, his own play area. It’s huge,” Coffee said.

As for the other: “I am not the same guy Jill met nine months ago. The guy I’m seeing in the mirror is virtually unrecognizable,” he explained. “I’ve had a number of epiphanies. This is my journey to remember that I was a bad-ass. I forgot that. I had my teeth kicked in over and over and lost track of the capabilities and goals that I once had.”

And when his case manager asked him where he saw his path leading, Coffee replied: “I started crying because I hadn’t had the opportunity or place in life to even think like that for a decade, or several decades. I am 40 and I went into the service right after high school. Now, here I am, skiddish and terrified. I had no idea what kind of resources were available.”

Today, Coffee is back in school working on his degree and looking at the opportunity of helping other veterans.

For Case Manager Carter, she said she wishes she had met one of her veterans currently lodged at the Super 6 two months earlier.

“It would have meant the difference between him selling his truck and getting his medicine,” she said.

When Coffee reflected on his experience, he said, “Get the information (of resources) out there. Literally, the lack of awareness is the No. 1 killer.”

And for other hotel owners and/or managers, Shah said the community benefit to organizing a housing program far outweighs the perceived risks a business might have.

“As a hotel we have our parameters. But you can talk through the challenges and there is support to help walk you through every step and make it work,” Shah said.

Bringing the discussion full circle, Carr added, “Awareness is key. Now Pratik knows about our organization, and someone may cross his path one day that he’s able to refer to us.”