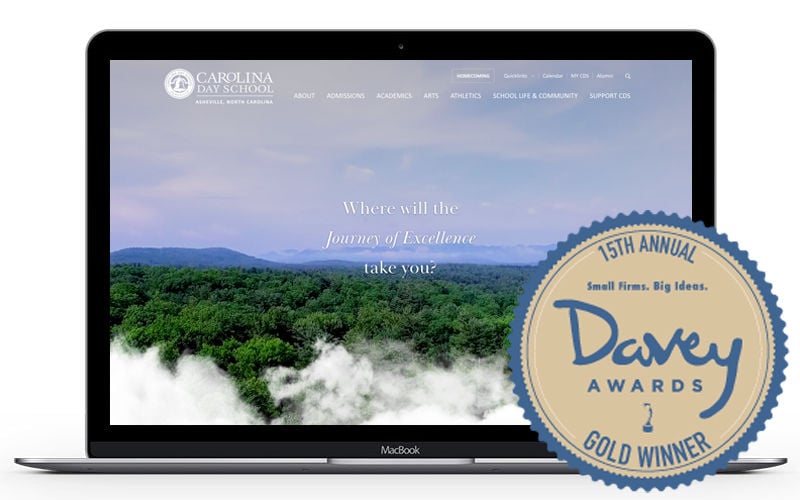 Carolina Day School announced this week that its new website, CarolinaDay.org, was awarded a Gold level distinction in the Davey Awards.

The Gold level is the highest ranking honor in the contest, and no more than 10% of the entries achieve it. Carolina Day is among only five to receive the Gold standing in the schools and universities category.

The Davey Awards are sanctioned and judged by the Academy of Interactive and Visual Arts (AIVA), whose members include executives from Condé Nast, Disney, GE, Microsoft, Monster.com, MTV, Sesame Workshops, Yahoo!, and more. This year, nearly 3,000 entries were submitted by advertising agencies, production firms, and public relations houses from around the world.

The Carolina Day School website was submitted by Finalsite, a website and marketing communications tools provider based in Glastonbury, CT with offices in London, Berlin and Hong Kong. Finalsite partners with schools to help them engage with community members, recruit and retain students, and fundraise.

Jon Moser, Finalsite founder and CEO said, “The Davey Awards set a high standard for websites internationally among smaller companies and organizations. We are thrilled with how Carolina Day’s project has made its mark for its originality and creative excellence.”

The CarolinaDay.org project, which launched in August 2019, began with strategy development in the summer of 2016. Customer research, site and page analytics, videography, architecture, design, photography, and writing took place over the course of a year, with project management and final design completed in spring 2019.

The project also included a non-public-facing site, the “MY CDS” parent and student portal, where all classroom- and school-related communication takes place for the school’s 600+ students and their families. The data coordination portion of the project was implemented by several departments of the school working together to fine-tune and test myriad data points and levels.