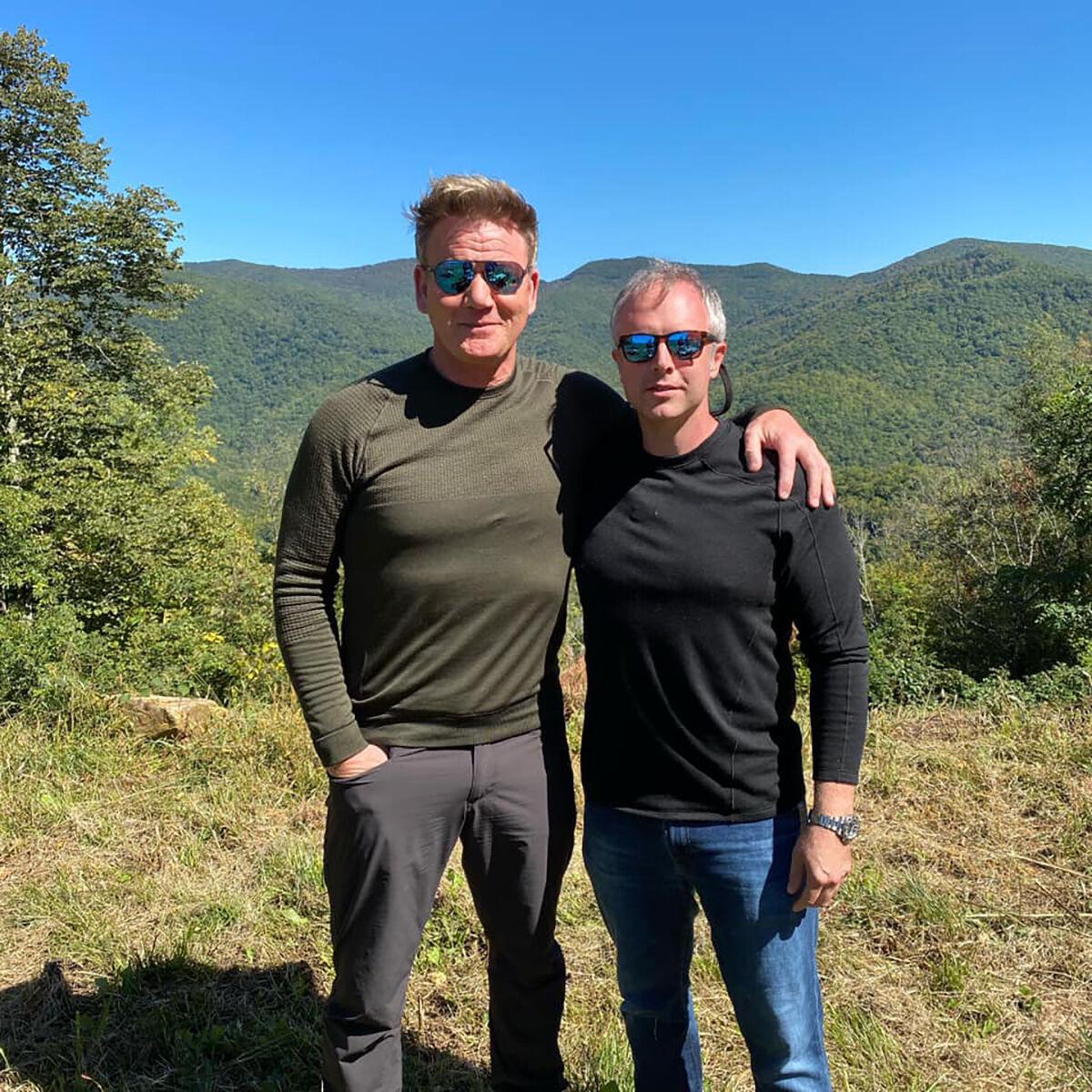 Celebrity chef Gordon Ramsay, left, called Asheville’s Chef William Dissen “one of America’s most sustainable chefs.” The two faced off in a cook-out in the Great Smoky Mountains episode of “Gordon Ramsay: Uncharted,” on Nat Geo. 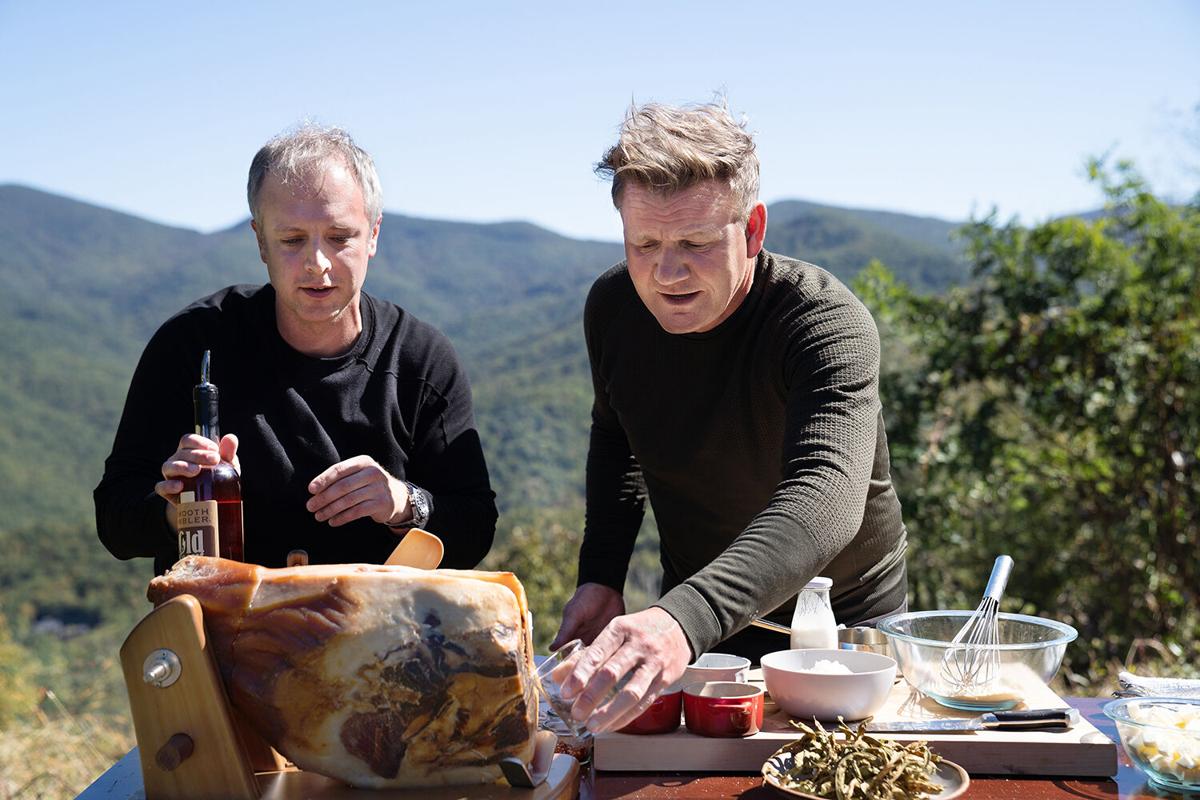 Chef William Dissen, left, and Gordon Ramsay take a break during the final cook in the Smoky Mountains of North Carolina to try a country ham and bourbon luge. 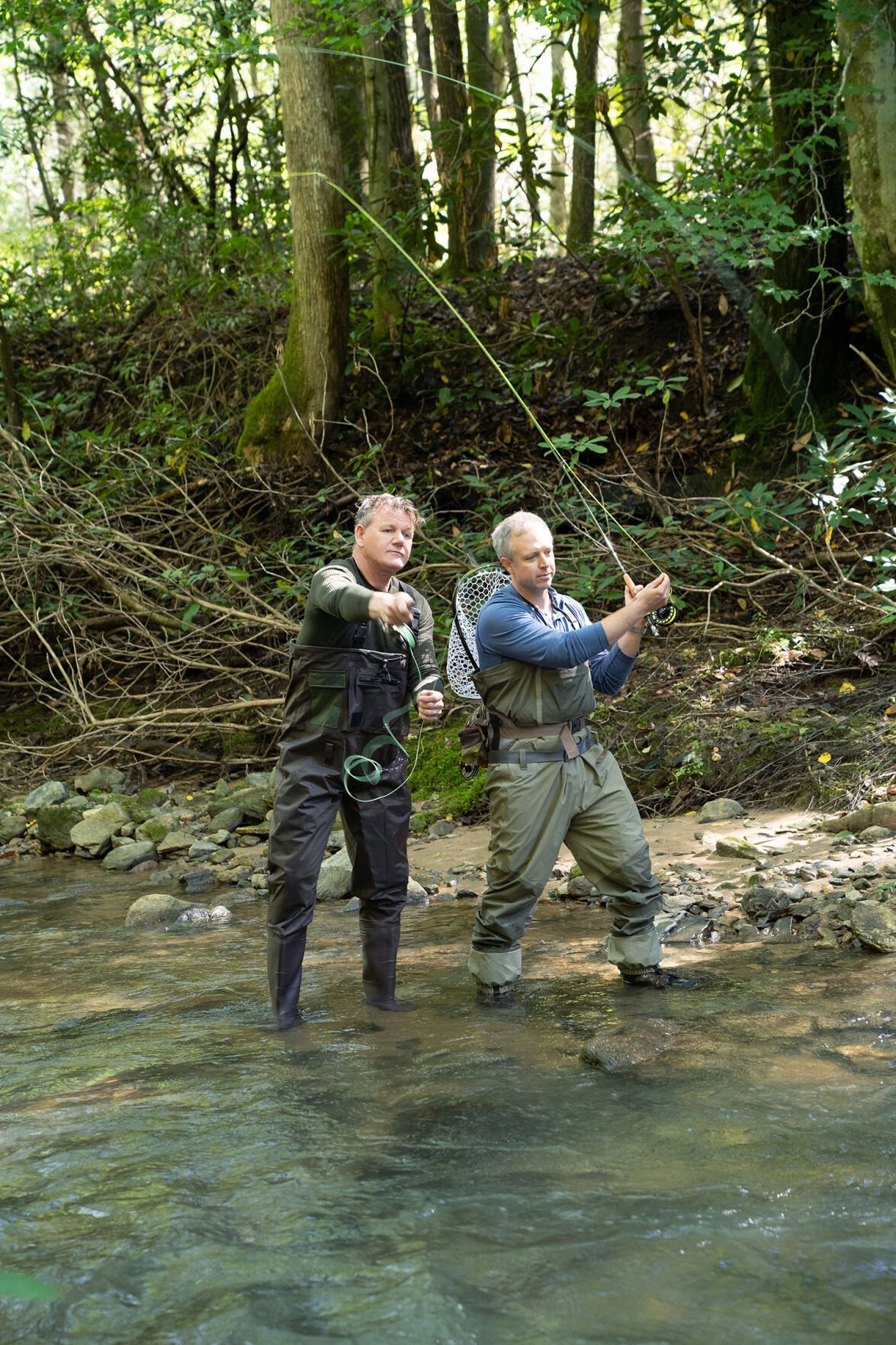 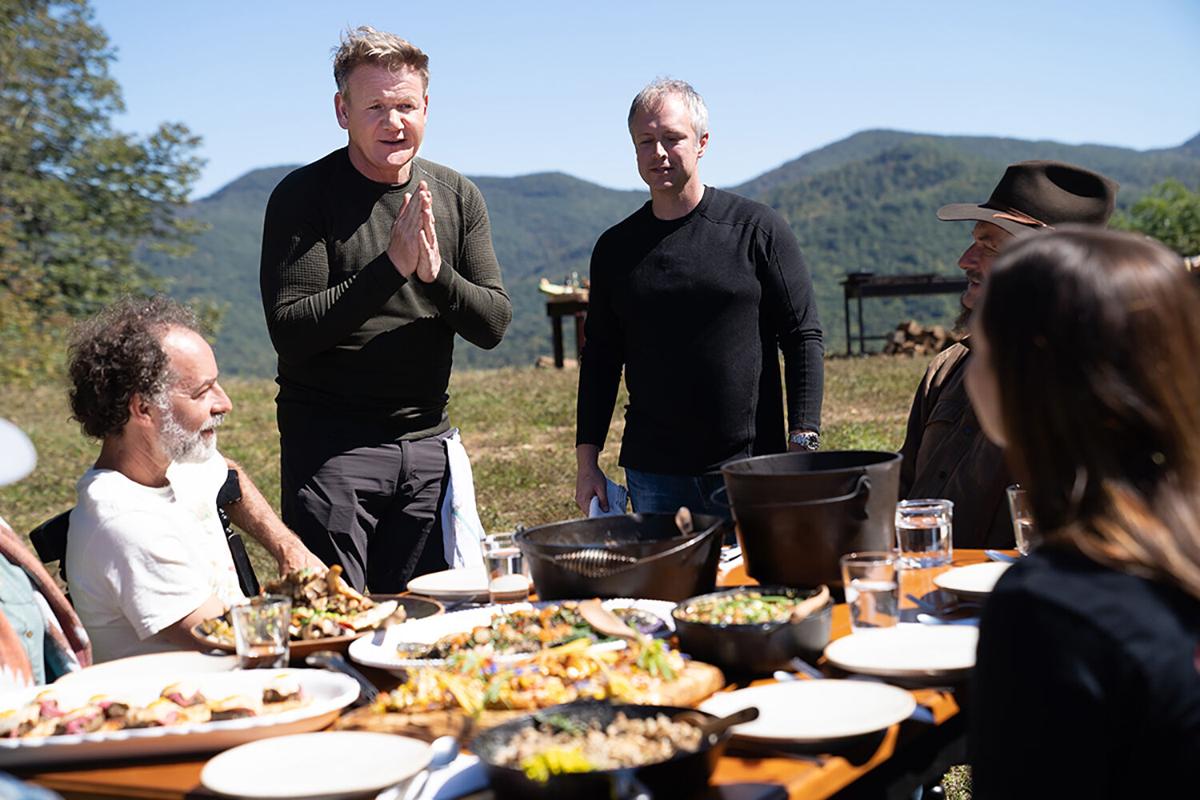 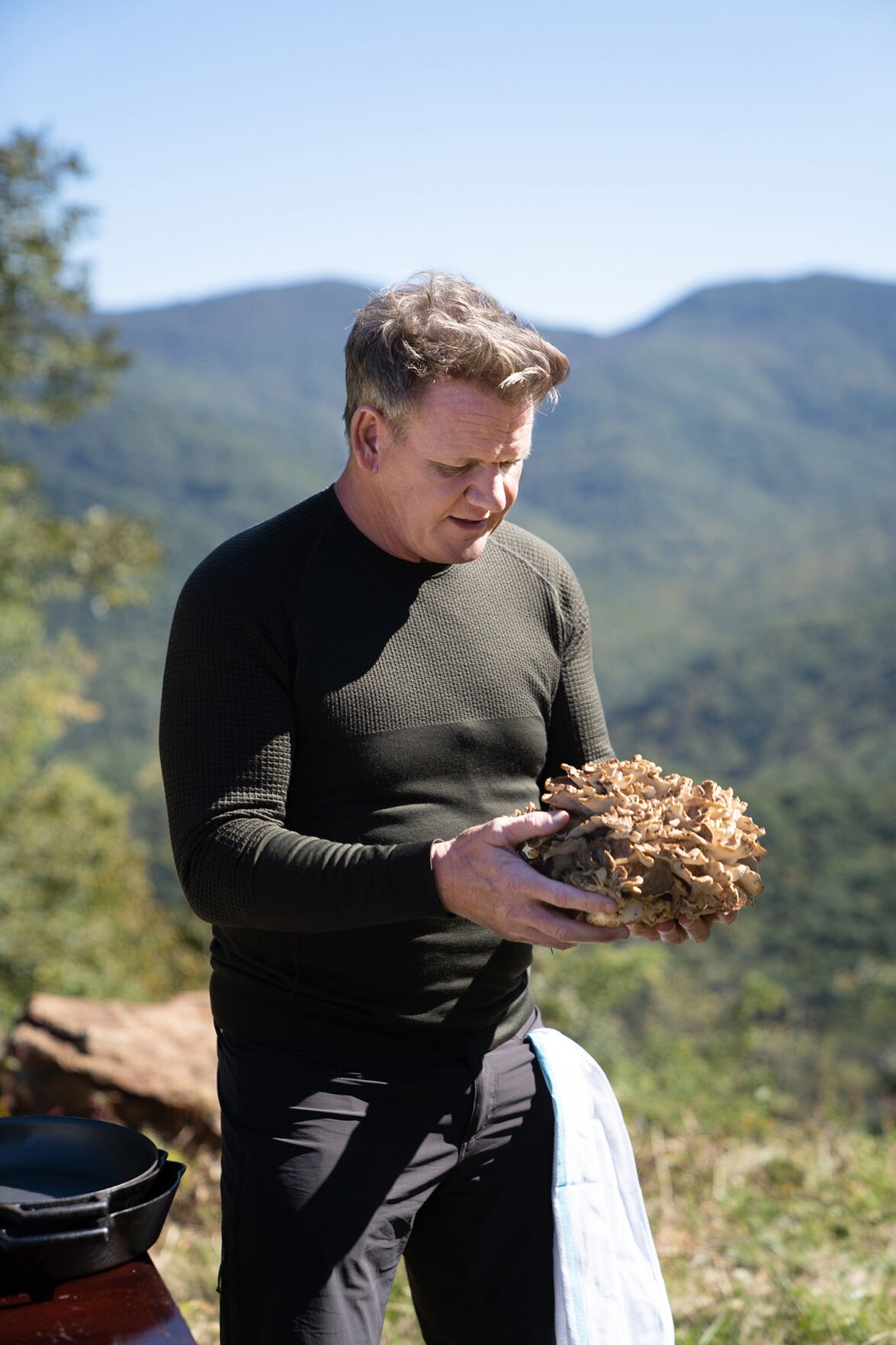 Celebrity chef Gordon Ramsay holds a wild-foraged hen of the woods mushroom, one of the mountain delicacies prepared in the cook-off vs. chef William Dissen in the Smoky Mountains of North Carolina. 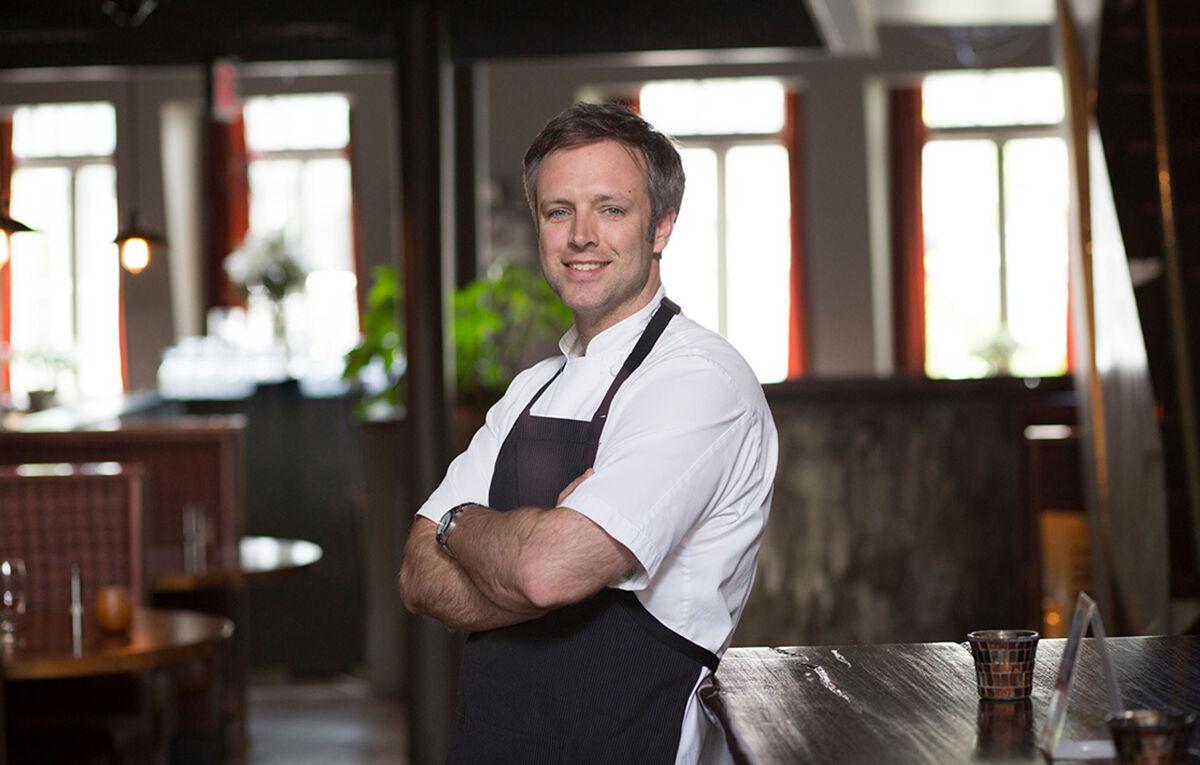 Chef William Dissen is one of the area’s pioneers in farm-to table cuisine and sustainability. He’s pictured at his The Market Place Restaurant in downtown Asheville. Photo courtesy William Dissen.

Celebrity chef Gordon Ramsay, left, called Asheville’s Chef William Dissen “one of America’s most sustainable chefs.” The two faced off in a cook-out in the Great Smoky Mountains episode of “Gordon Ramsay: Uncharted,” on Nat Geo.

Chef William Dissen, left, and Gordon Ramsay take a break during the final cook in the Smoky Mountains of North Carolina to try a country ham and bourbon luge.

Celebrity chef Gordon Ramsay holds a wild-foraged hen of the woods mushroom, one of the mountain delicacies prepared in the cook-off vs. chef William Dissen in the Smoky Mountains of North Carolina.

Chef William Dissen is one of the area’s pioneers in farm-to table cuisine and sustainability. He’s pictured at his The Market Place Restaurant in downtown Asheville. Photo courtesy William Dissen.

Foodies know Britain’s Gordon Ramsay as a celebrated multi-Michelin-starred chef, owner of a culinary empire and the brash TV star of “Hell’s Kitchen.”

Ramsay, in his third season of “Gordon Ramsay: Uncharted,” airing on the National Geographic Channel, “journeys to some of the most incredible and remote locations on Earth in search of culinary inspiration, epic adventures and cultural experiences he will never forget.”

He got that unique cultural experience and hopefully, great culinary inspiration, when he visited Western North Carolina last year to film an episode of his National Geo TV series.

Ramsay faced off with William Dissen, owner and chef of Asheville’s The Market Place Restaurant, calling Dissen “one of America’s most sustainable chefs.”

In late spring 2020, Dissen received emails from the producers of Ramsay’s National Geo show. But he said he thought it was spam. The producers called him, assuring him that they wanted him to be on Ramsay’s show.

His family was supportive, especially since Dissen has a subscription to National Geographic for his two young children.

Thinking back on the summer and fall of 2020, it was a tough time for everyone. Dissen, like all business owners, had a rough go of it with the business slowdown during the pandemic.

“So, I thought, why not do the episode — things were slow at the time,” Dissen said. “I realized this was an amazing opportunity to be an ambassador for WNC.”

Dissen is one of the area’s pioneers in farm-to-table cuisine and sustainability.

“I believe in sustainability through action,” Dissen said.

He grew up in West Virginia and watched his grandparents pickle and preserve food on their farm. After college, Dissen was trained at Culinary Institute of America in New York, graduating with honors. He went on to receive a master’s degree in hospitality and restaurant management from the University of South Carolina.

Dissen purchased The Market Place Restaurant in Asheville in 2009 and subsequently opened Haymaker Restaurant in Charlotte and Billy D’s Fried Chicken in Asheboro.

Among many honors, Dissen was named Green Chef of the Year twice by Fortune Magazine.

He cares deeply about relationships with local farmers and how they grow their food.

“There is no cuisine without gardens and farmers,” he has said.

Dissen has been on the board of the Appalachian Sustainable Agriculture Project (ASAP) for five years.

In each episode, a cook-off with a local chef, using local ingredients and Ramsay’s learning during his week on location, is central.

Dissen was asked to show Ramsay around, then let him go off on his own to learn about mountain cuisine. Dissen lent Ramsay his 4x4 truck to drive during the week.

Each episode includes a bet, a wager agreed upon by Ramsay and the local chef for the judged winner of the cook-off.

Dissen came up with the bet for his episode and went large. If Ramsay won the cook-off, Dissen would hand him the keys to his truck to keep. But, if Dissen won, Ramsay had to fly Dissen and his family to London to dine at Ramsay’s namesake restaurant.

“You have to remember that back in 2020, the world was falling underneath us (with the pandemic),” Dissen said. “So, I thought, ‘Let’s go big with the bet.’”

Dissen said the magnitude of the bet took Ramsay by surprise, but Ramsay said, “Game on.”

Dissen said he only knew Ramsay by reputation “as one of the most famous chefs on the planet.”

Surprisingly, Dissen said that Ramsay is “a nice guy and very laid back.”

“While Gordon’s TV persona is brash, he spent a lot of time with me and took time to talk about both of our businesses,” Dissen said. “Remembering the difficult times of last fall, he gave me a pat on the back and urged me to keep going.”

The Smoky Mountains episode begins with a fast car, a nod to WNC’s moonshiner heritage, and finds Ramsay rappelling down a waterfall to meet Dissen trout fishing. Little Bradley Falls in Saluda was the setting for Ramsay’s wild ride down the waterfall, a real stunt Ramsay exclaimed “was insane.”

Dissen was fly fishing at the bottom of the falls, in an area known for brook and brown trout.

Ramsay introduced Dissen to viewers as “a Smoky Mountains legend, and a multi-award-winning chef, focused on fresh, healthy, sustainable food.”

After talking about the 2,000 rivers and streams of Western North Carolina and the incredible beauty of the area, Ramsay went off to explore the mountains’ “biodiverse wilderness, steeped in history.”

“Every layer you peel away from the Smoky Mountains onion is fascinating,” Ramsay said.

Then came the cook-off, filmed near the top of Balsam Mountain Preserve, starting out in a 28-degree October morning.

Ramsay prepared what he discovered during the week, including crawfish with apple moonshine, hen of the woods mushroom, livermush, which he called his “dark horse,” and hominy with Andouille.

“I know the ingredients like the back of my hand,” Dissen said.

The two enjoyed friendly banter while cooking and Dissen unveiled what he called “his secret weapon,” a large ham with a deep V-channel down the middle. Dissen asked Ramsay to enjoy a bit of bourbon after it was first passed through the “luge,” cut into a country ham. Ramsay accused Dissen of “trying to get him drunk.”

“It threw Gordon for a loop,” Dissen said.

With the mountain top cook-off meal prepared, the guest judges, all people Ramsay met during his week learning about mountain food, arrived to sample the culinary creations.

After deliberation, the spokesperson said, “We’re going with the local guy,” giving Dissen the win.

Gracious in defeat, Ramsay commented that he learned a lot during his week here.

“This area is one of the best-kept secrets on the planet,” he said.

“I’m humbled and honored by the win,” Dissen said. “And I’ll cherish this win for the opportunity of sharing the heritage of mountain heirloom ingredients.”

“Ramsay thought WNC was amazing,” Dissen said. “He felt what we have here is second to none and that he thinks our food heritage is undervalued. Remember, he’s an explorer.”

Certainly, Dissen is looking forward to the first-class trip to London and dinner at Ramsay’s restaurant.

“After all, there are only so many three-star Michelin restaurants across the planet,” Dissen said.

William Dissen’s The Market Place Restaurant & Lounge can be found at 20 Wall St. in downtown Asheville. It’s open nightly for dinner, and on Saturday and Sunday for brunch. Visit www.marketplace-restaurant.com.