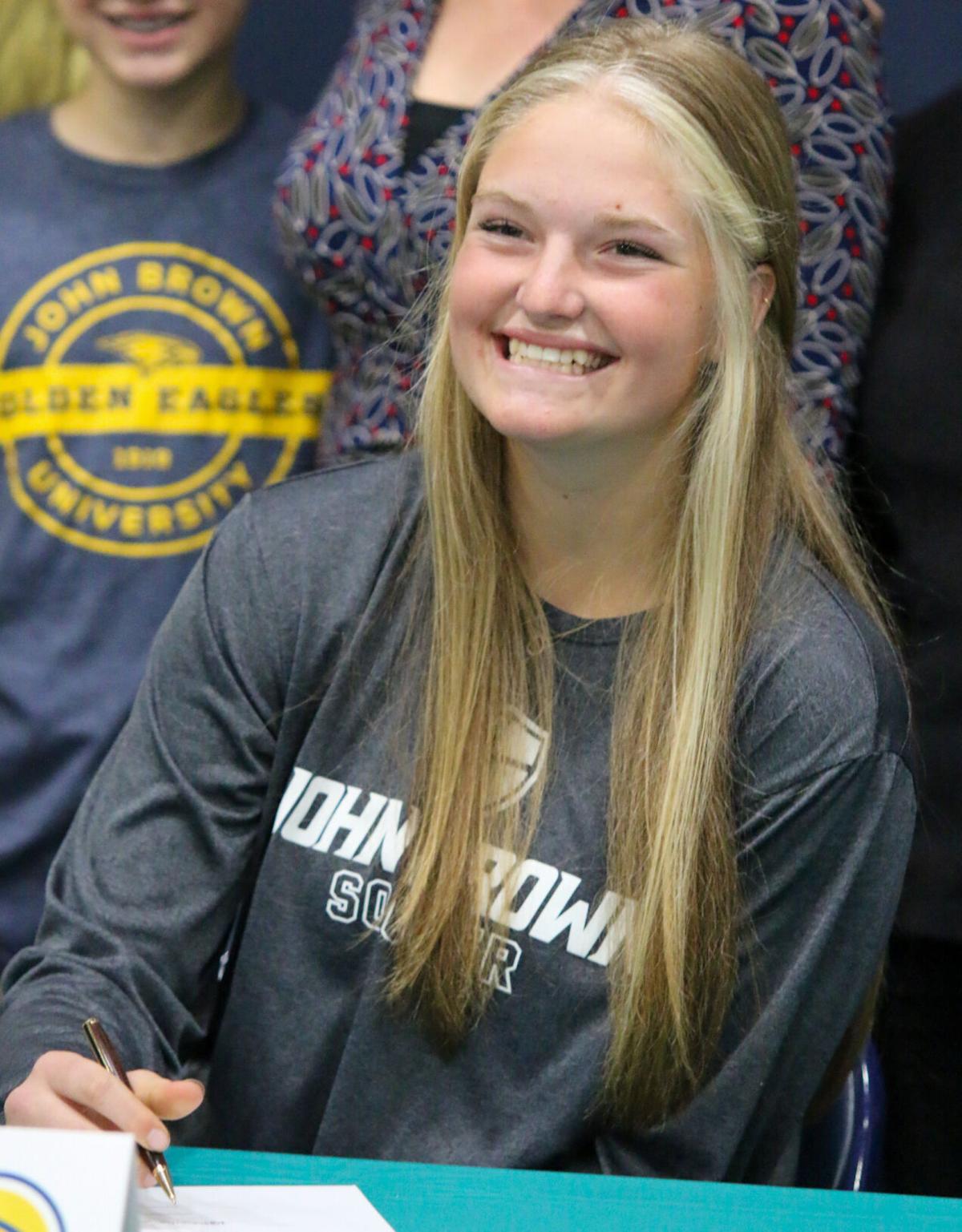 Lilli Johnson is all smiles after signing to play soccer at John Brown University. The University is a soccer powerhouse located in Siloam Springs, Arkansas. /Photo courtesy ACA journalism. 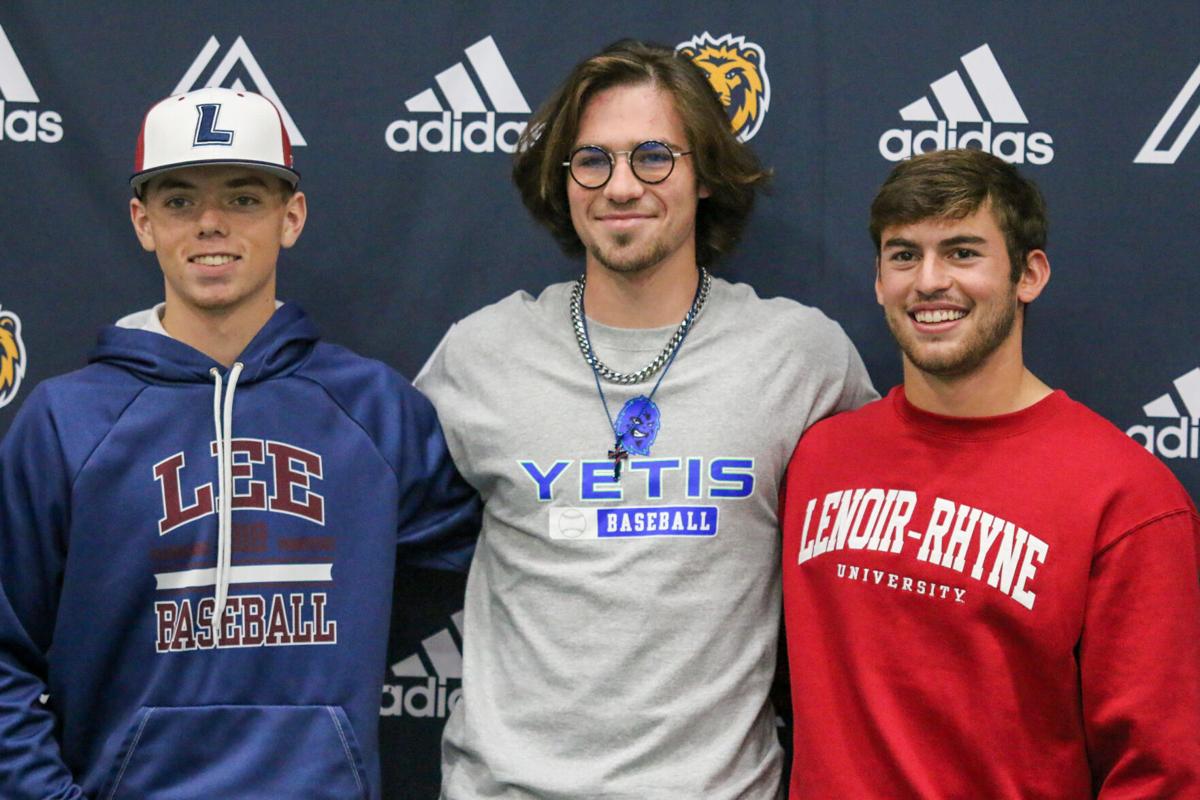 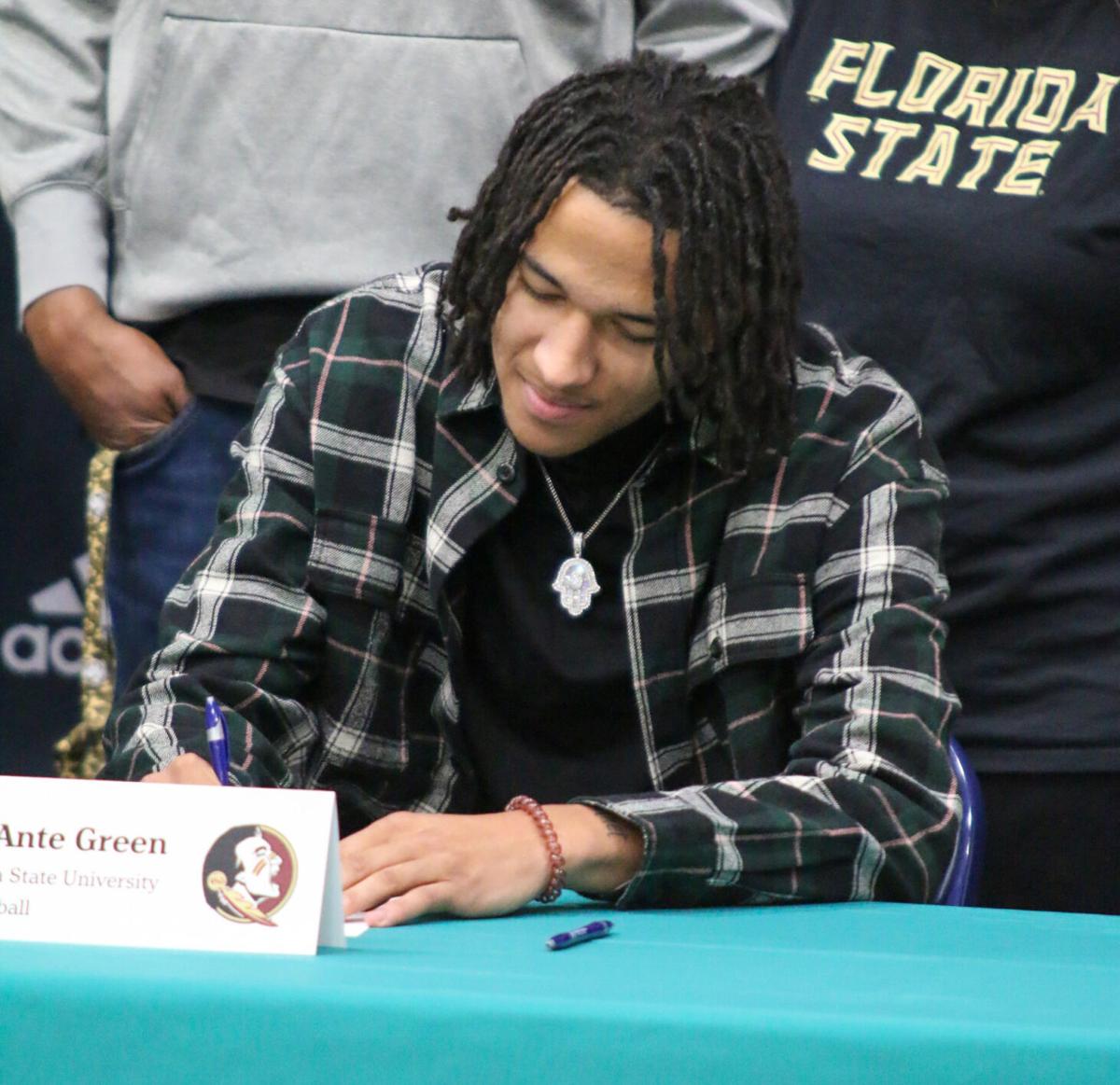 Lilli Johnson is all smiles after signing to play soccer at John Brown University. The University is a soccer powerhouse located in Siloam Springs, Arkansas. /Photo courtesy ACA journalism.

In a celebration held Nov. 15 in the school gymnasium, Asheville Christian Academy acknowledged five seniors who have made early commitments to college athletics.

“We had more early signings this year than most years,” said ACA Athletic Director Joe Johnson. “Technically, we do our college signings celebration in the spring, but this year there were several early commitments from the past summer and this fall, and we decided to take care of those five athletes. We will have some more in the spring with an event in early April and May.”

Johnson explained the importance of the early signing to the athletes.

“The NCAA has different things for different sports. What it does is ensure the athlete, the school and the families that not only is it a verbal, but it goes beyond,” he said. “Now, it is a signed agreement as far as these monetary scholarships are involved. It also provokes the school and the athlete to bring closure to the recruiting process.”

Lilli Johnson is an All State and All Conference forward on the soccer field. She is an attacker on the field. In 17 games last season, she scored 20 goals and assisted in another 16. Johnson led the Lions to a 14-3 overall record and a perfect 6-0 record in league play.

The team advanced to state, but lost in the semi-finals.

John Brown University is not only a soccer powerhouse, ranked sixth nationally in the NAIA, but also one of the top academic universities in the nation. The WSJ ranked JBU as Arkansas’ No. 1 university.

Coach Benware has no doubt Johnson will be successful on and off the field.

“Lilli is a great student, that’s part of the foundation for being able to go to a strong academic school. She’s also a very strong player. She’s a very clinical and technical player, and I think something we talk about but also gets hidden quite a bit is that she brings so much to team culture in terms of just being a team player and great teammate. She keeps the standards high on the field and off on a daily basis,” he said.

ACA Head Coach Chris Zacarro described his talented troika of players this way: “Luke Collier is the starting shortstop and our No. 1 pitcher. He signed as a shortstop to play at Lee University; Ben Michael is our starting centerfielder and occasional pitcher, and leadoff hitter. He has signed to play at Lenoir Rhyne University. Joshua Morgan is our starting catcher who also pitches and has committed to play at Cleveland Community College. All three last year were selected to the All-Conference team and the All-State team. It was the first time in school history that the baseball team had three selected to the All-State team.”

All three seniors will be instrumental in the upcoming spring baseball campaign. Last season the trio was responsible for 47% of the hits and 50% of the RBIs of the team totals.

“Josh Morgan is a solid catcher, a big kid at 6’2” and 251 pounds, and is the epitome of a next-level hitter. He bats in the three hole and ended the year batting .450 with 27 hits and 24 RBIs, and led the team in doubles. He’s a hitter,” Coach Zaccaro said.

As for Collier, who set the school record last year in stolen bases with 21 steals, Zaccaro said, “Collier is a great shortstop, has great hands and throws the ball across the diamond effortlessly. Quite honestly, in college, he could be a legitimate two-way player, and I won’t be surprised if Lee University decides to give him the opportunity to pitch.”

As for Michael, Zacarro added, “Ben is a solid centerfielder, lock down outfielder. Anything in the air he is going to get to and catch. Ben has a canon for an arm.”

“He got noticed that day. I’ve used him as a closer the last couple of years.,” Zacarro said.

Zaccaro expects a lot of the trio this season. The team finished 10-9 overall and 3-2 in the NCISAA Conference and expects to improve with more experience this season.

Green is 6’10” inches tall and last season averaged 10 points and 11 rebounds a game.

“We had more early signings this year than most years. Technically, we do our college signings celebration in the spring, but this year there were several early commitments from the past summer and this fall, and we decided to take care of those five athletes. We will have some more in the spring with an event in early April and May.”