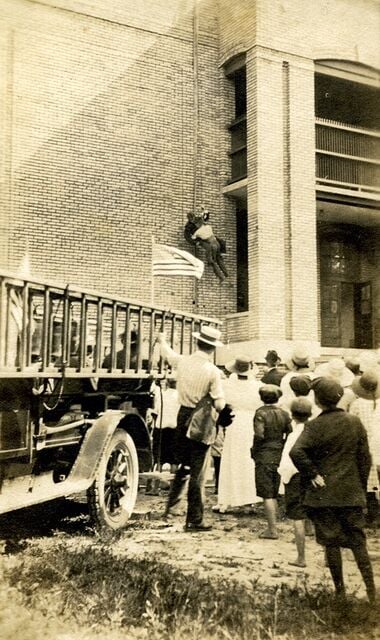 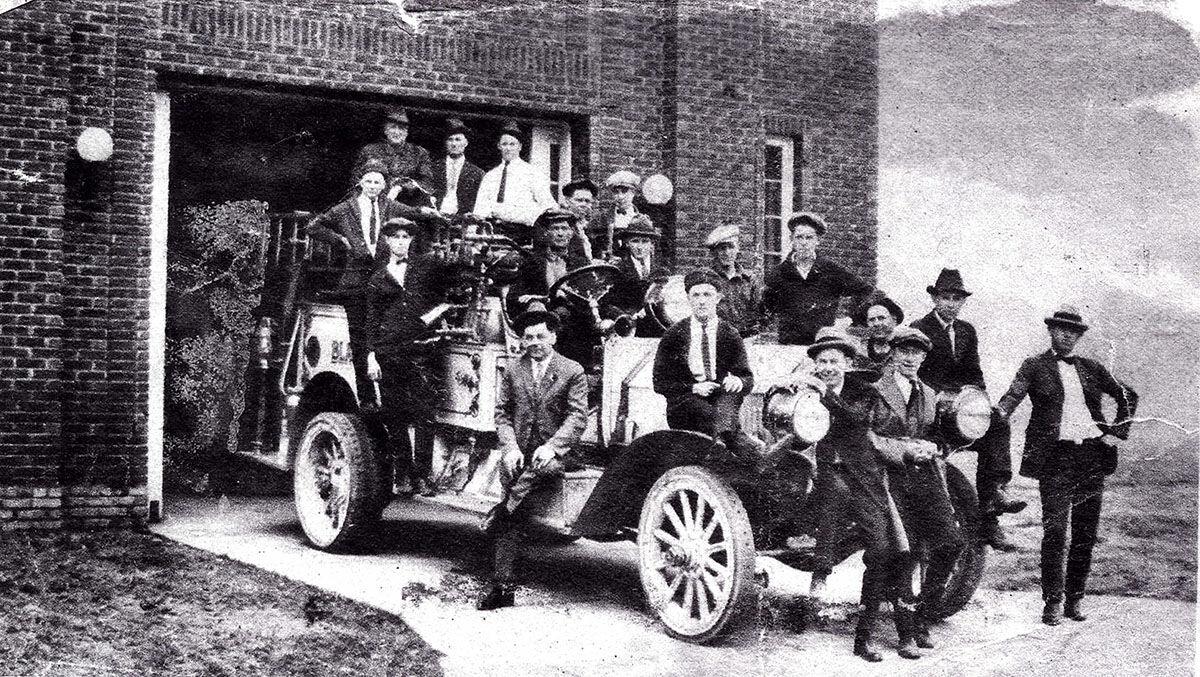 The firehouse, constructed in 1921 on West State Street, housed Black Mountain’s first volunteer fire department for 63 years before the department moved to its current location on Montreat Road.

The exhibit features artifacts from the museum’s archives, as well as the Black Mountain Fire Department (BMFD), including 1920s- to 1930s-era ladders, hose reel carts, fire extinguishers, ledgers, helmets and more. Banners and historic photos of the department help to tell the story of the organization’s early history, from its founding after a devastating fire to its move into the State Street firehouse to efforts to train local citizens in fire safety to raising funds through period entertainment such as mock trials and womanless weddings.

Rising From the Ashes

The story of Black Mountain’s Fire Department begins with a devastating fire that took place on the night of Nov. 25, 1912.

The blaze began at a livery stable and quickly swept through downtown Black Mountain, destroying several structures on Sutton Avenue and Cherry Street, including the Southern train depot. Citizen bucket brigades battled the fire until a fire truck and crew from Asheville arrived by railway.

It is said that the fire motivated the town’s citizens to develop a volunteer fire department.

By 1919, BMFD was officially organized and housed in a building on the northwest corner of Broadway and Sutton avenues. However, the department recognized a need for a more adequate space, and after many fundraising efforts, was able to purchase property on State Street and begin construction on a new firehouse.

The new building was designed by famed architect Richard Sharp Smith, a partner at the architect firm Smith & Carrier, who also served as the supervising architect of the Biltmore House and other buildings on George Vanderbilt’s estate. The firehouse was opened in May 1922, and given the name Currier Hall in honor of R.E. Currier, the department’s first fire chief.

As an all-volunteer department in its early years, members, as well as a supportive women’s auxiliary, made constant efforts to raise funds for new gear and training. The department hosted many forms of entertainment that was popular during the time period, including womanless beauty pageants, Tom Thumb weddings and even blackface minstrel shows. The department also hosted mock trials, in which the public paid to view theatrical scenes of court proceedings in which department members were tried for making and selling moonshine.

Other forms of fundraising included time the department educated the public about fire safety and prevention, encouraging local businesses and households to clear away debris that could act as a fire hazard, and conducting safety training at local schools.

The department was housed at its State Street location until 1984, when it moved to a new location near the town center. In 1989, the building was turned over to the Swannanoa Valley Museum & History Center, which has made renovation efforts to honor the building’s history, including installing newly furnished fire truck doors in 2016.

Today, BMFD continues to provide many of the same vital services that it has for the past century, including firefighting, emergency medical response, educating the public on fire prevention and more.

The exhibit is scheduled to run through the end of the year. The museum is open from 10 a.m. to 5 p.m., Thursday to Saturday.

Admission is free to the public, with a suggested donation of $5 per person. for more information, contact Museum Director LeAnne Johnson at swannanoavalleymuseum@gmail.com or 828-669-9566.

Learn More About the Firehouse

The talk is part of the museum's WNC Café series and will take place at 105 N. Dougherty St.

The cost to attend is $8 for museum members; $12 for non-members. Tickets can be purchased at swannanoavalleymuseum.org/event/firedepartment.