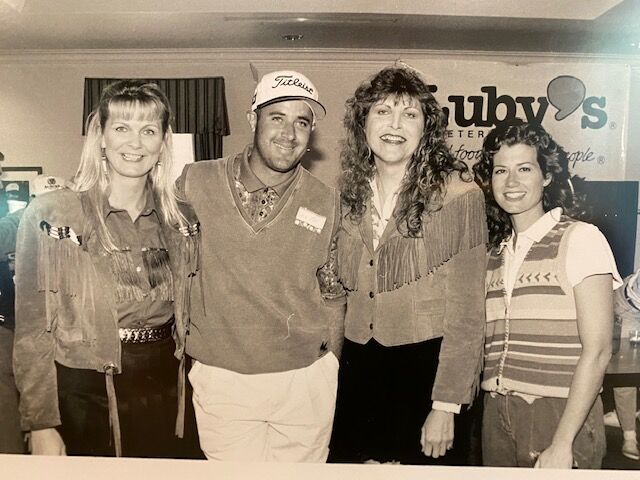 Deep River is a six-piece country music band known for its female harmonies.

Deep River is a six-piece country music band known for its female harmonies.

When Deep River takes the stage Saturday, July 9, at Isis Music Hall, it will be celebrating more than its 30-year anniversary (for two of them, at least). This group of musicians is just happy to play music with people they sincerely like. One might say their harmony goes beyond their singing.

Only Sharon Lewis and Sandy Howard have been in the band for 30 years, but the other four members aren’t far behind. The band will have two extra members for the 30th anniversary performance.

“When I started Deep River in the spring of 1992 in Connecticut, my intent was to create a band with three men and three women because I had been the founder and drummer and vocalist for an all-woman country band prior to that and I didn’t like the energy that came out of that,” said Lewis, who plays bass guitar and sings alto and both lead and harmony vocals. “So I wanted three men and three women for that perfect yin yang.”

Thirty years later Lewis has stuck with that strategy of having an equal number of women as men in the band (even when they add other musicians temporarily) and so far so good. Sandy Howard, Lewis’ wife, and the only other original member, plays acoustic guitar and sings first alto, lead and harmony vocals. Nita Smith, soprano, makes up the third female voice and sings lead and harmony vocals.

The men include Gerry Brown on acoustic guitar, Alec Fehl on lead guitar and Justin Watt on drums. Brown has been with the band for 15 years and was specially ordained by the Universal Life Church to marry Sharon and Sandy in 2014, the day after gay marriage became legal in North Carolina. Fehl has been with Deep River for six years, Watt for 14 and Smith for five.

Joining the band for the 30th anniversary performance will be Paul Stroebel on fiddle and Gabrielle Tee on keys. “We added them to provide our audience with the sound of a Nashville-style professional country band,” Lewis said.

Lewis and Howard made a name for themselves in Nashville years ago when they left Connecticut with their harmonies and original songwriting to make it in Music City. They spent about 10 years there before giving it up for Asheville.

“When Sandy and I were in Nashville, we were trying as hard as we could,” Lewis said. “We had a management team and publicists and all of that to get a major label record deal. But Nashville wasn’t ready for a gay couple. Music row is sort of like an isolated community and was even more so back in ‘93. They all talk among themselves— the producers, the publishers, the engineers, the songwriters and the musicians. We learned all kinds of interesting things about other closeted gay musicians in Nashville.”

But they weren’t closeted, Howard said. “We didn’t hide it, but we weren’t in people’s faces. I think people knew.”

But the experience wasn’t for naught. They arrived in Asheville in 2003 with a repertoire of original songs, many of which they plan to perform for their 30th anniversary event. It wasn’t until about 2007 that they put out feelers for a new band.

“For this show we really wanted to celebrate, given the momentous occasion, our original songs, too,” Lewis said. “So half of the songs will be original material and half will be the songs of our heroes, like Patty Loveless, Pam Tillis, Kathy Matea and many others.” The band did open for Matea several years ago at an event in Shelby, but beyond some regional performances, the band doesn’t tour.

The anniversary celebration also will include a multi-media segment full of photos from their Nashville days, and videos, many of which were made during the pandemic to keep from going stir crazy.

Fehl might be the best example of the band’s good karma. He grew up playing every kind of music on his guitar except country. He said he does like some of the band’s original music and some of the old-school country musicians. But mostly he likes the challenge of playing new music. “Every week I’m at rehearsal, I’m working out things I couldn’t play the week before,” Fehl said.

Brown credits the band’s success on and off the stage with Lewis’ direction and each musician knowing his or her role. “The truth of the matter is Sharon rules with an iron fist. She cracks a whip and that’s a good thing when it comes to bands because this is a very disciplined band. Everybody knows their role is to support vocals,” Brown said.

Lewis and Howard are pleased they have an opportunity to showcase their music friends, whom they consider family, in such a venue as Isis. They hope it’s not the last time, either.

"From the very beginning, from the time I founded the band, in the spring of ‘92, we have treated our friends/band mates like family, with the greatest respect and love and humor, hopefully. I’d like to think that has something to do with our longevity,” Lewis said.

The show starts at 8:30 p.m. on the Main Stage. Tickets are $20 and $25. Masks are required as is a proof of vaccination or negative COVID test within 48 hours of concert, For ticket information, visit isisasheville.com.