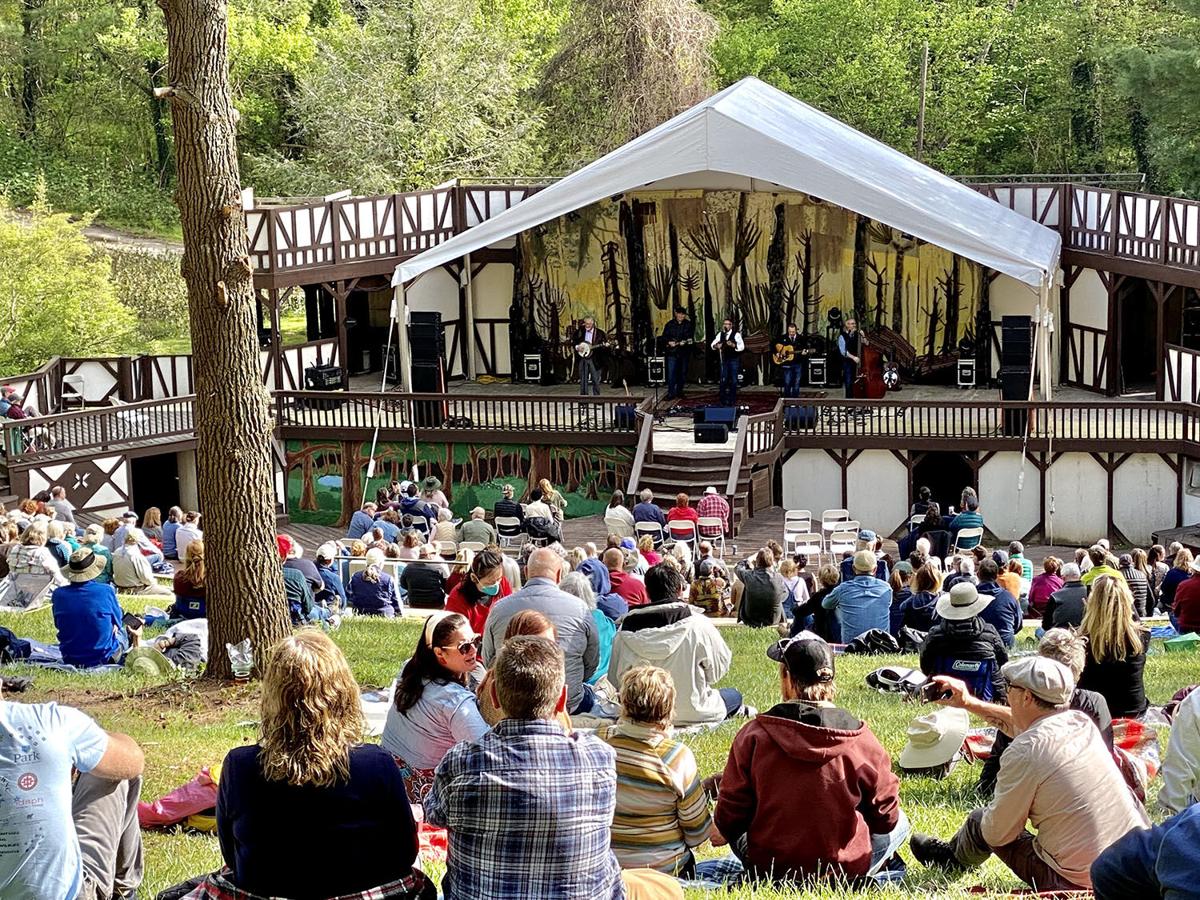 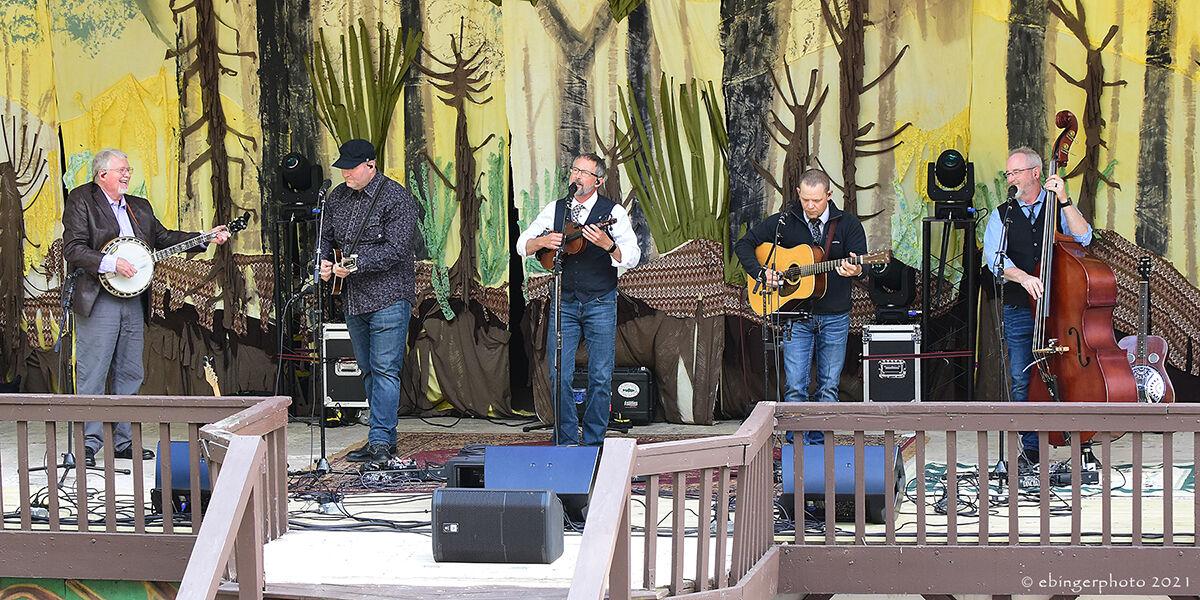 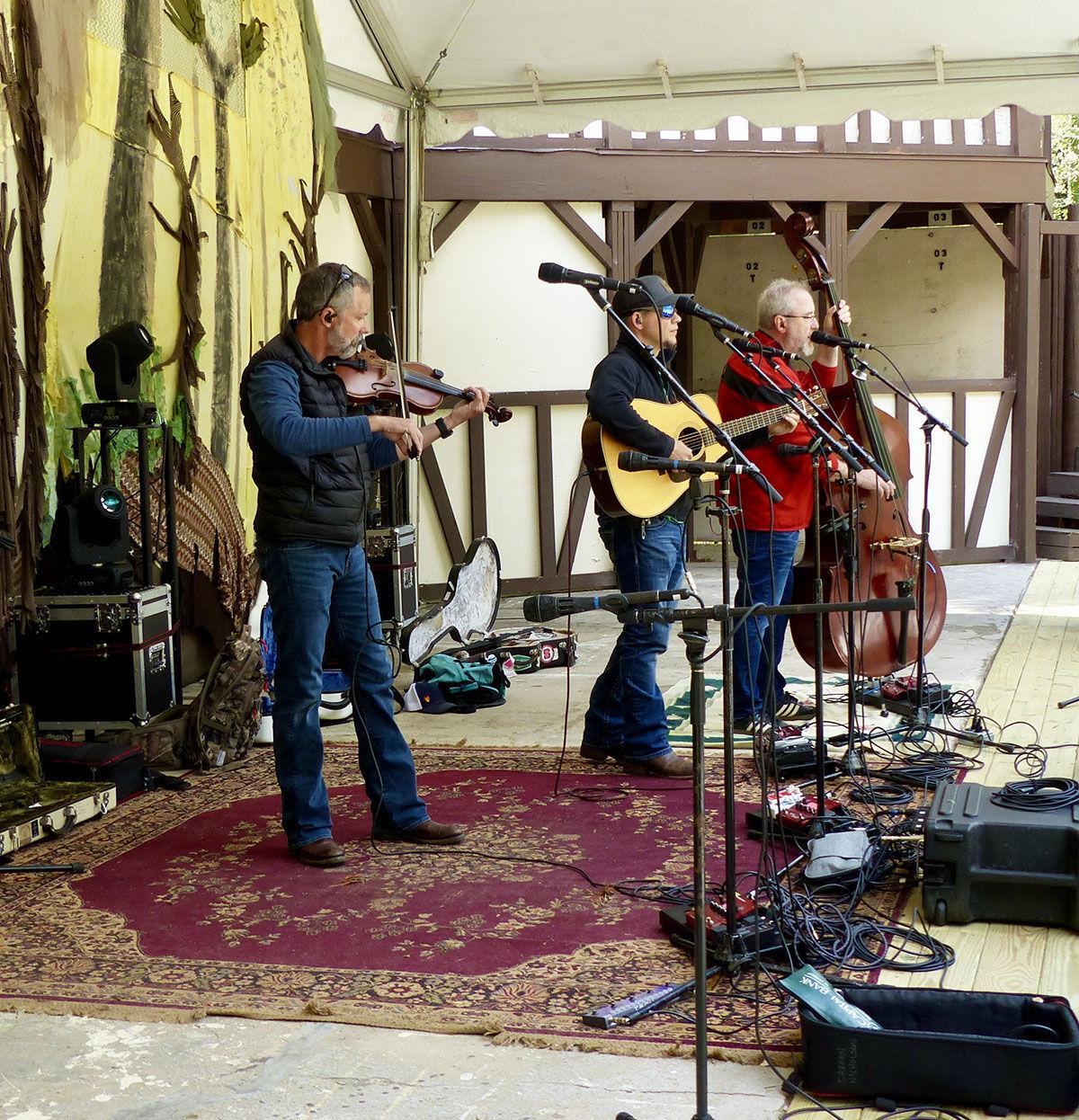 The members of Balsam Range said fans have been hungering for the band to play live music. Pictured are Buddy Melton, Caleb Smith and Tim Surrett during sound check. Carol Viau photo. 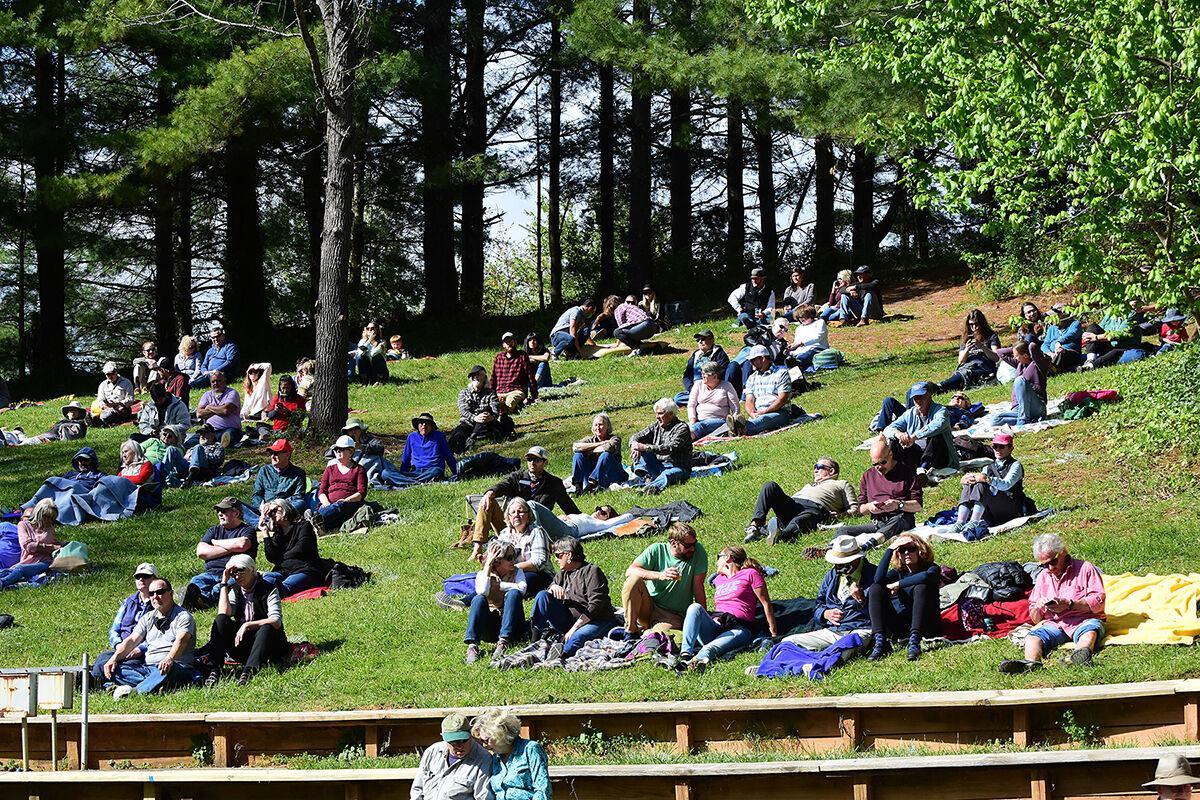 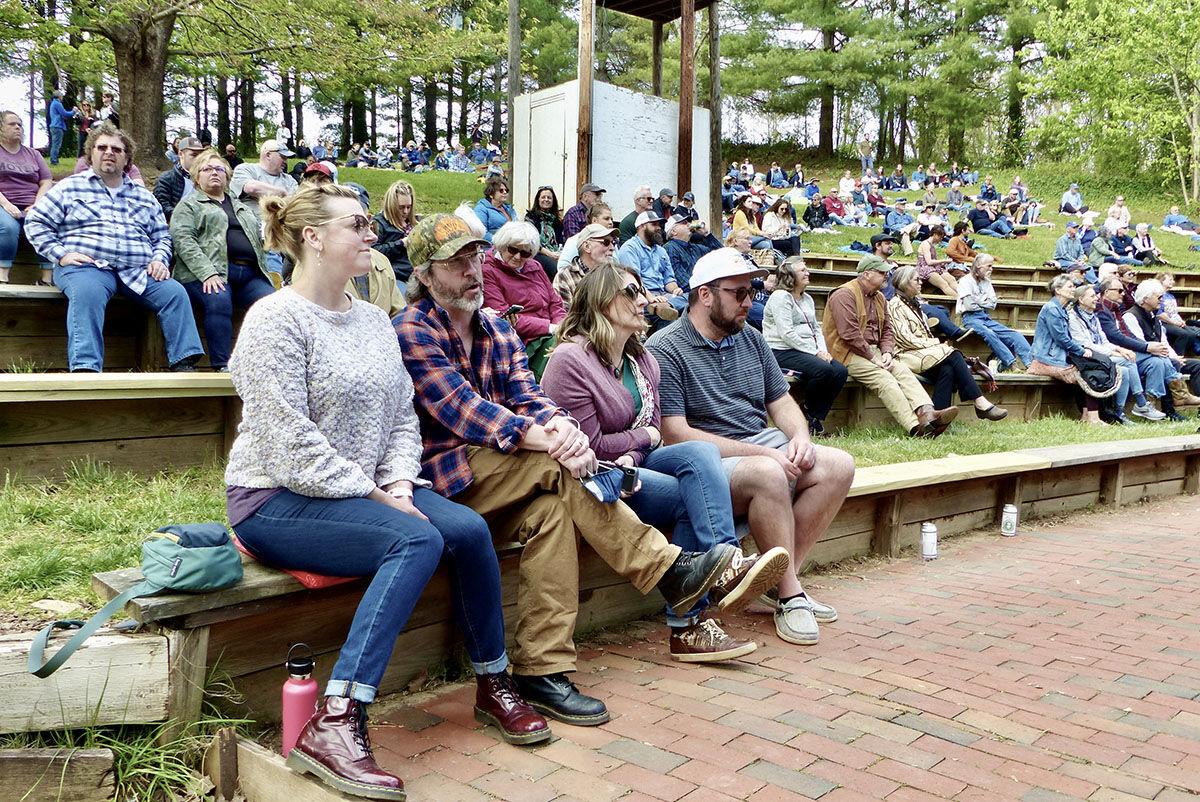 COVID-19 precautions are observed in the rustic outdoor setting of the Hazel Robinson Amphitheatre. Pictured is the socially distanced bench seating in pods for the kick-off Balsam Range concert in April. Carol Viau photo. 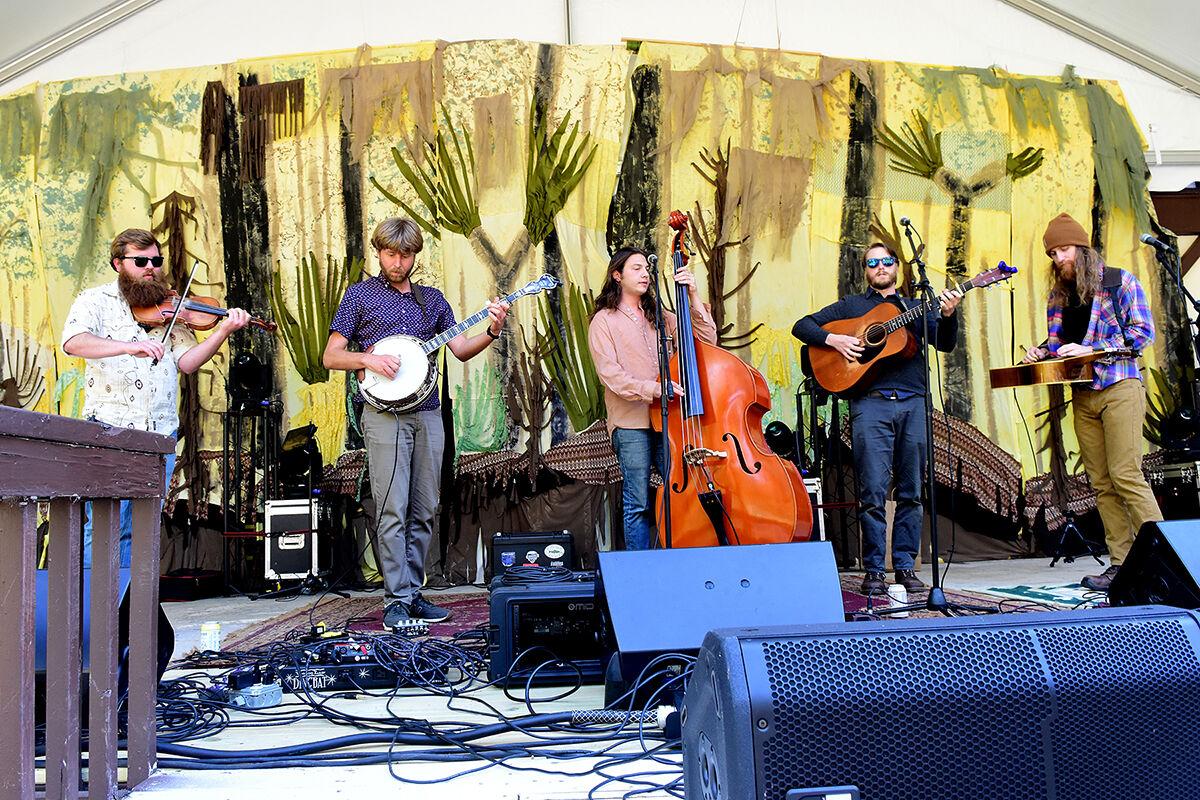 The members of Balsam Range said fans have been hungering for the band to play live music. Pictured are Buddy Melton, Caleb Smith and Tim Surrett during sound check. Carol Viau photo.

COVID-19 precautions are observed in the rustic outdoor setting of the Hazel Robinson Amphitheatre. Pictured is the socially distanced bench seating in pods for the kick-off Balsam Range concert in April. Carol Viau photo.

It is said that music feeds the soul. The hills of Western North Carolina have always been a beacon of musical performances — until the pandemic shut down venues throughout the area.

“Music has a way of connecting people,” said Buddy Melton, lead singer and fiddle player for the bluegrass band Balsam Range, which, to the delight of many, started back live concerts recently. “People keep telling us they have been missing live music.”

During the pandemic, people fed their hunger for music watching live streams of concerts. Last fall, drive-in concerts became prevalent. A few music halls, such as Isis in West Asheville, began socially distanced concerts. Happily, The Orange Peel and the Grey Eagle re-started pod-seating live concerts in Asheville. And, as the weather warms up, outdoor venues like Salvage Station in the River Arts District are back up and running with socially distanced concerts.

In some ways, the Hazel Robinson Amphitheatre (HRA) in Asheville’s Montford neighborhood is yet to be discovered as an outdoor venue, presenting first-class music performances. Some know it as home to the Montford Park Players, which stages Shakespeare and other dramatic entertainment May to October.

Described as “a hidden gem,” HRA is Asheville’s only outdoor amphitheater.

While most concerts presented at HRA are in the bluegrass, folk and Americana genres, jazz, funk and soul acts also have taken the stage there.

“We’re trying to be respectful of the community and neighbors in the Montford area with the type of groups playing at the amphitheater,” said Kyle Davies, managing partner at Plugged-in Productions, which has presented music there since 2018.

Davies said he was excited when he first stumbled upon the amphitheater, realizing that it’s a unique venue for Asheville. He approached John Russell, executive director of the Montford Park Players, about sharing the stage for live music concerts. It was agreed that music could be presented on days when the Players do not have performances.

“It’s beautiful being outdoors at this venue,” Davies said.

The concerts use socially distanced seating, per COVID guidelines, with pods marked for lawn seating, and pod seating for the higher ticket price chairs and bench seating. While attendees may not bring chairs, it didn’t seem to bother the hundreds of people on blankets or benches, enjoying the fresh air and live music.

Kicking off the re-start of live music at HRA was Balsam Range, the multi-award winning and legendary bluegrass band from Haywood County.

This was the first time Balsam Range performed at the amphitheater, and it was a homecoming for Balsam Range, which hadn’t played WNC since the pandemic began.

“The amphitheater is a great place for concerts,” Melton said. “They’re booking some terrific musicians. Live music is important for the area and the people, so we hope the concerts can continue.”

Melton said the band has not played many concerts this year due to the ongoing pandemic.

“It’s exciting and weird at the same time to be back on stage,” Melton said. “It’s been so long since we’ve played for a concert, we now have butterflies before playing for people.”

Balsam Range stayed “busy and productive,” during the shutdown days, recording new music for an upcoming album. Some of the songs, like “Richest Man,” “Grit and Grace” and the new “Rivers, Rains and Runaway Trains,” have topped the bluegrass charts this past year. New music will be released in the next two weeks.

Melton is touched that the message in “Grit and Grace” (“I supplied the grit and God supplied the grace”), has resonated with people. It was co-written by his mother, Ann Melton, and acclaimed songwriters Milan Miller and Beth Husband, who contribute many songs to the Balsam Range song catalog.

“The greatest reward we could have is the positivity people tell us comes from the song,” Melton said. “We’re proud of the many reasons ‘Grit and Grace’ has impacted people.”

Melton said Balsam Range is delighted to be back on stage.

“The fans tell us they’ve been hungering for us to play for them,” Melton said. “Since it’s been a while, the performance may not be perfect, but we’ll laugh through it together. It’s good to be back with the guys — and with the WNC home crowd.”

Balsam Range vocalist and bass and dobro player Tim Surrett told the crowd, “It is so good, so good — so good — to be back playing music for you.”

Asheville’s Supper Break String Band opened for Balsam Range and got the bluegrass groove going. In addition to Balsam Range, folk quartet Mipso has played this season at HRA. Next up is rising country music star Charley Crockett, followed by dobro master Jerry Douglas. In June, The Travelin’ McCourys with the Jon Stickley Trio are scheduled.

The concerts will continue on weeknights through at least October, with some big names in the works. Davies hopes to have announcements on future acts soon.

The concerts use socially distanced seating, per COVID guidelines, with pods marked for lawn seating, and pod seating for the higher ticket price chairs and bench seating.