You have permission to edit this article.
Edit
News
Arts
Health & Wellness
Living
40 Under Forty
Multimedia
Find Us
e-Edition
Calendar
1 of 2 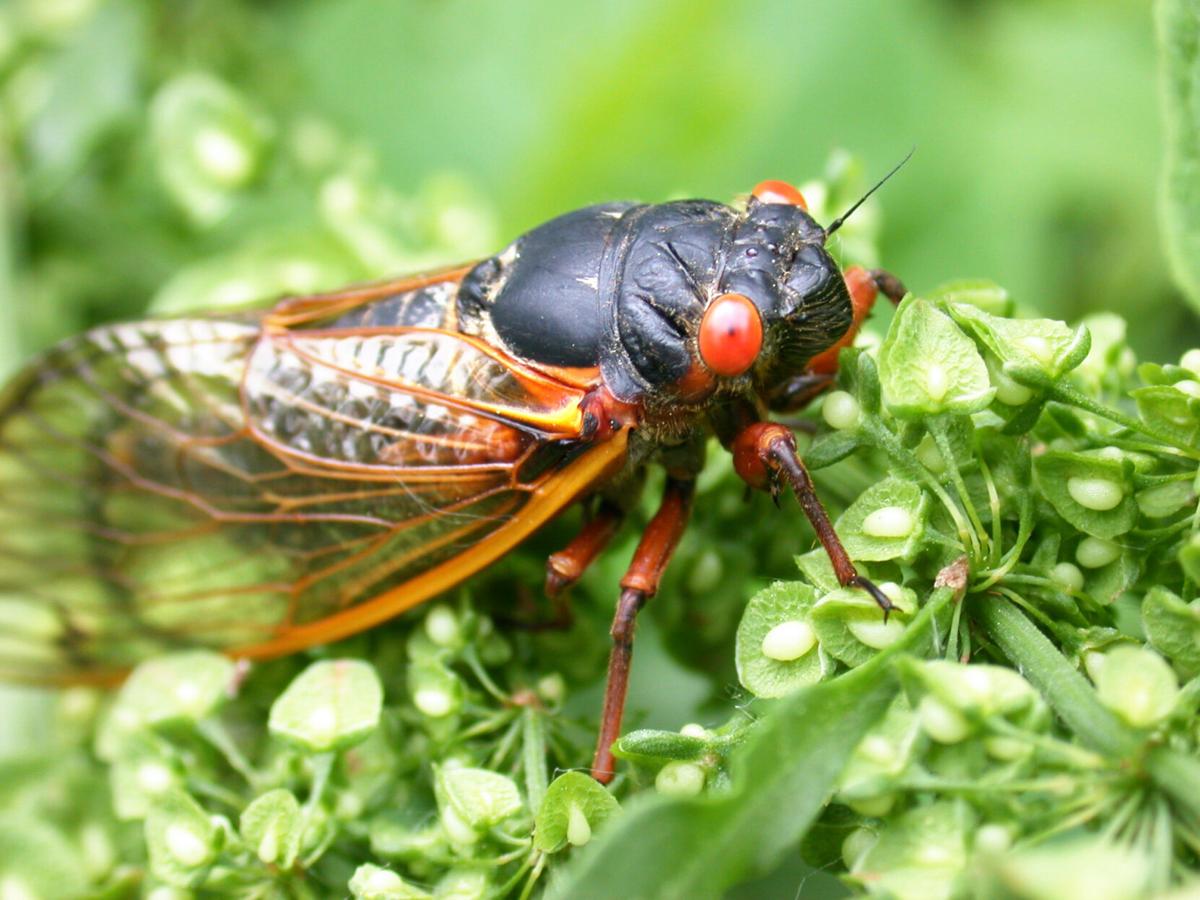 Cicada singing on a plant. 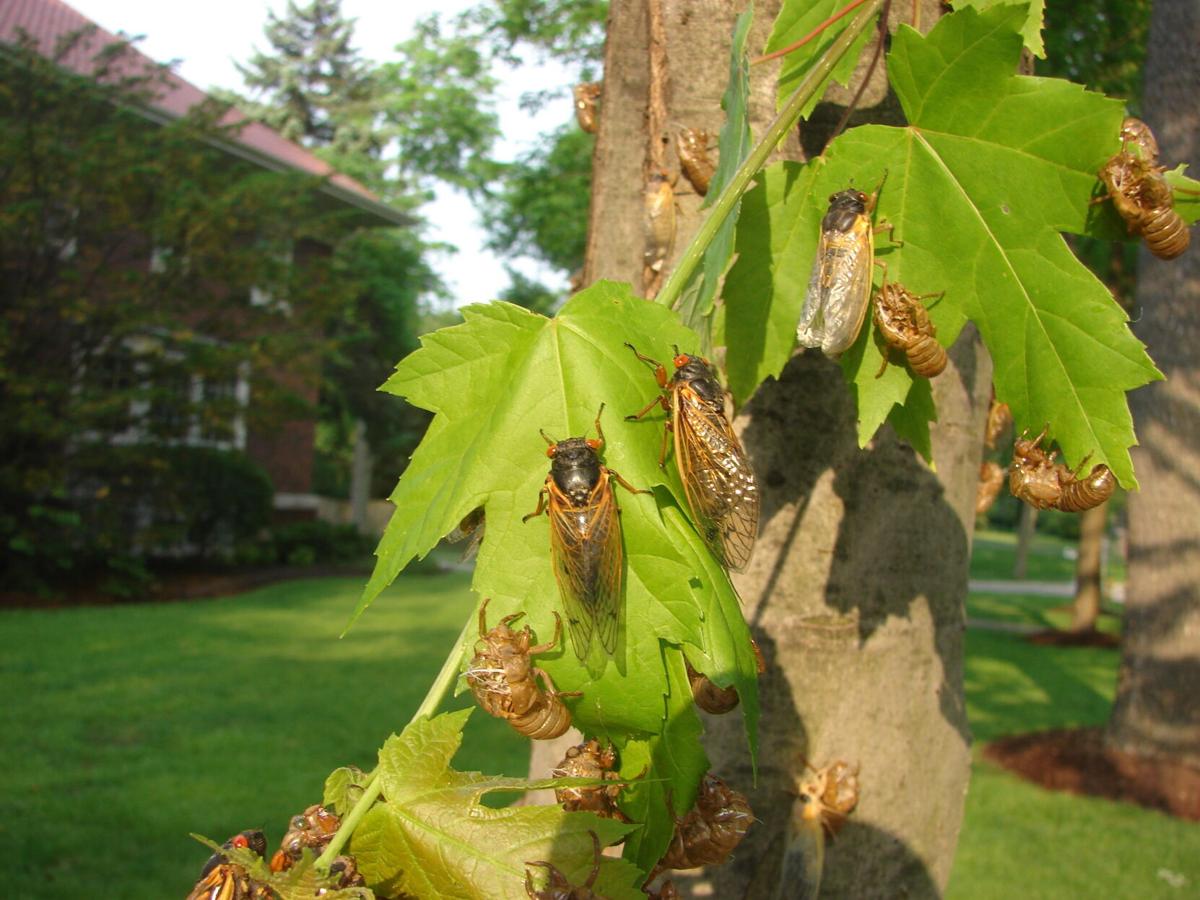 Cicada singing on a plant.

This year, we can substitute “cicadas” for British. The 17-year cycle soon will begin in vast swaths of the southeast where many will be able to clearly hear the mating sound of the male cicadas that have been estimated to collectively be as loud as a lawn mower.

Aside from being noisy and hibernating for 17 years, cicadas are rather strange looking with black bodies, clear wings and big red eyes.

Janet Loehrke and Doyle Rice, of USA Today explain these insects breathe through 10 pairs of “spiracles,” two of which are on the thorax and eight on the abdomen. They have antennae that are short and bristly. USA Today describes them as being 1 to 2 inches long with a wingspan of 3 to 4 inches. Their name can be pronounced as si.KAY.da or suh.KEI.duh.

Loehrke and Rice are giving advance notice that every 17 years, the central, southern and eastern areas of the U.S. see a massive emergence of these cicadas.

The “periodicals,” which are the largest of the many types of cicadas, known as Brood X, will surface about mid-May with a huge cacophony of sound. The soil temperature must reach 65 degrees before they can emerge, so they can even emerge in late April.

Their sound might remind you of a monstrous orchestra tuning up (or being out of tune.) There can be as many as 1.5 million cicadas per acre, which means the brood population might be into the trillions. Males make the sound used in courtship, as female cicadas do not have sound-making organs.

According to Gene Kritsky, an entomologist at Mount St. Joseph University, these insects could be around for a four- to six-week period. If the weather is warm and dry, they will finish mating sooner than later, which might mean a shorter season. Usually, they start to die off in late June or early July.

Why do we see them only every 17 years? Because after mating, the females lay eggs in twigs of trees and also in shrubs. One female can lay as many as 600 eggs. Six to 10 weeks later, the eggs hatch and the tiny little nymphs fall from the trees and burrow beneath the soil, from about 6-18 inches deep. For 17 years, these nymphs receive nutrition sucking on the roots of the trees and shrubs.

Cicadas are neither locusts nor katydids. Locusts are a form of grasshopper. They are far more destructive, as they can cause severe damage to crops. Although large swarms of cicadas can damage very young trees as they lay their eggs in branches, larger trees can withstand them pretty well.

Kaytdids are part of an insect family known as Tettigoniidae and are also called “bush crickets,” as they look similar to crickets. They, too, have strident mating calls, but not nearly so loud as cicadas.

Biologist Matt Kasson explains that cicadas will not hurt you. They don’t sting nor bite and they’re not venomous, so humans do not catch disease from them.

The only thing one of these insects might do is prick your skin if you hold it long enough. But don’t worry; they’re not vampires. They just might think you are a tree.

Killing cicadas is not a good idea, according to entomologist, Dr. Nancy Troyano, as they are beneficial to the environment. They prune mature trees and aerate soil. When they die, their bodies provide nitrogen for growing plants.

In her words, Troyano says “treating yards to kill cicadas will result in an unnecessary application of pesticides to the environment and treating these insects directly may also sicken animals who try to eat them.”

This would include domestic pets. Besides, they have plenty of natural predators waiting to pounce on them, such as rodents, reptiles, marsupials (the American possum), birds, fish and even other insects, such as spiders.

However, Troyano admits you might not want one in your home. She explains “If a cicada gets in to your home, scoop it up in a container and take it outside. They can try to fly away, so have a lid handy.”

Maybe we’ll see them and maybe we won’t. If you get to see them, they surely will be fascinating.

The “periodicals,” which are the largest of the many types of cicadas, known as Brood X, will surface about mid-May with a huge cacophony of sound. The soil temperature must reach 65 degrees before they can emerge, so they can even emerge in late April.