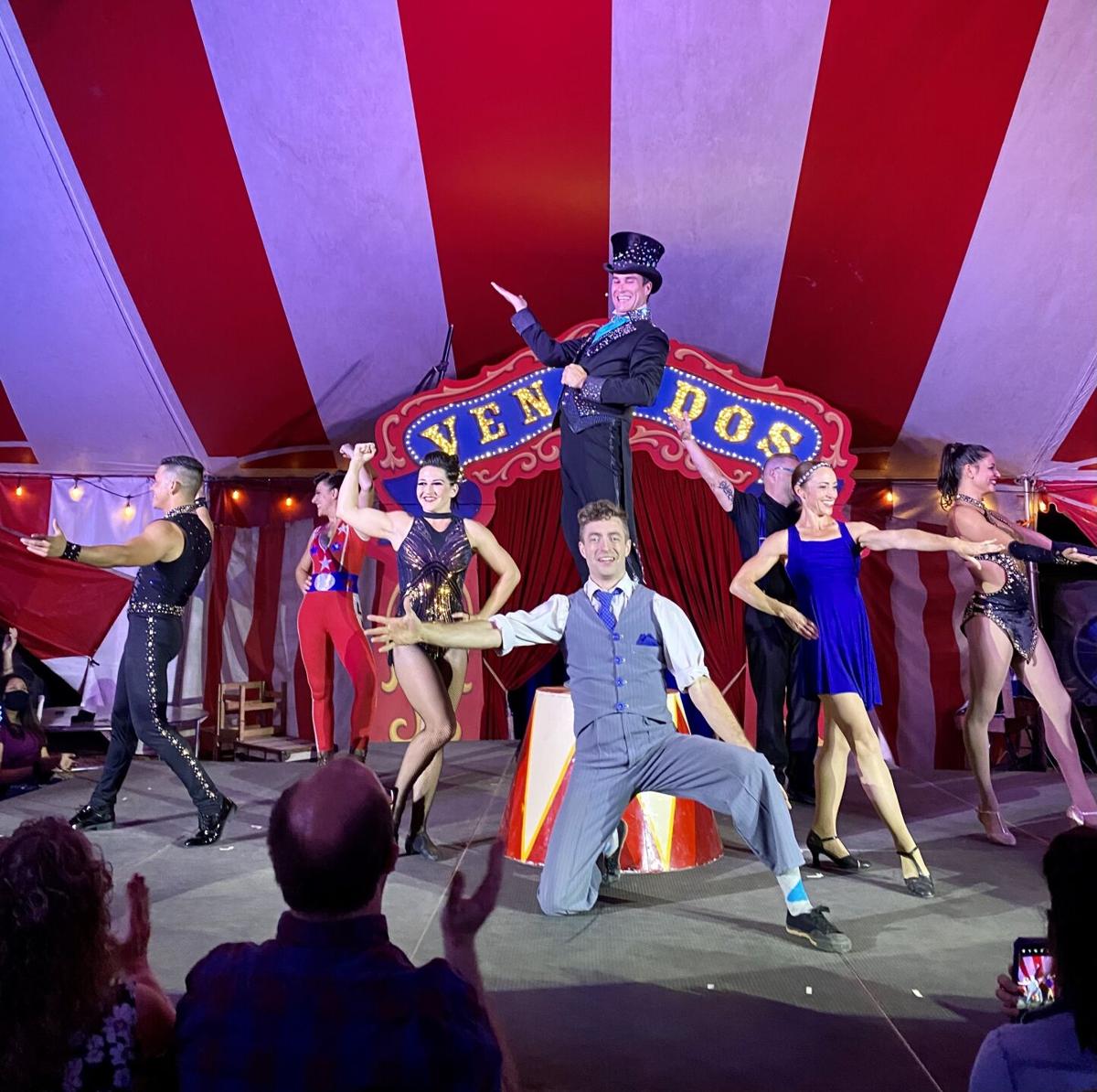 Performers in the Venardos Circus blend old-school entertainment with a modern twist on comedy, acrobatics, and song and dance. 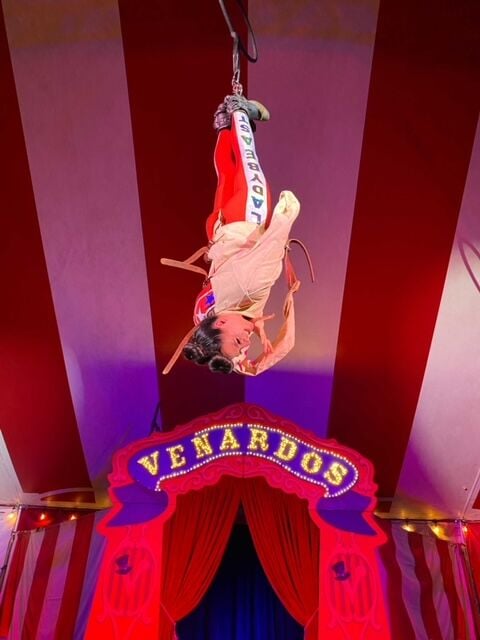 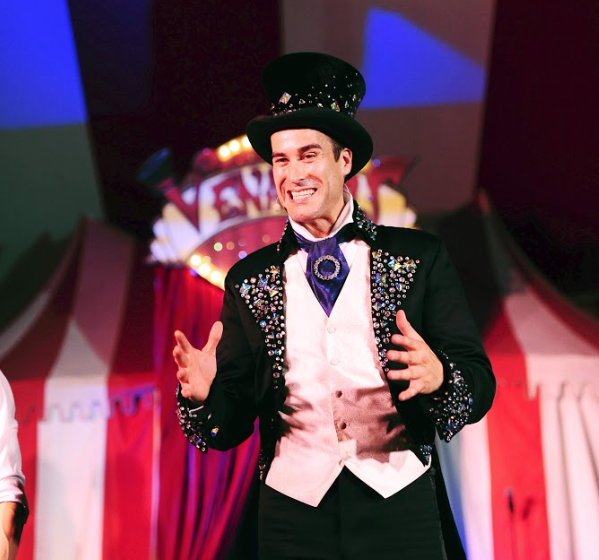 2021 showman Kevin Venardos is the ringmaster and owner of Venardos Circus, where he puts his degree in musical theater to great use under the red and white big top. 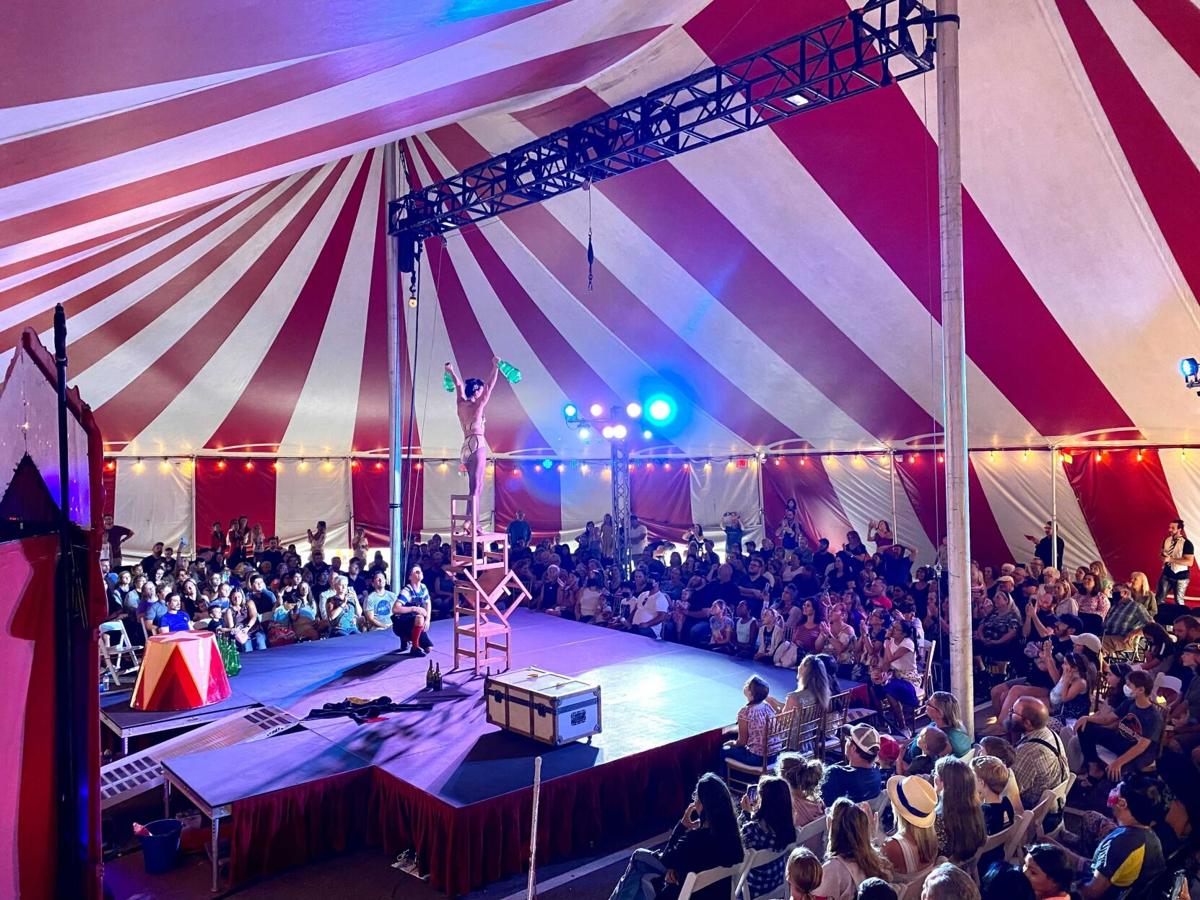 LadyBEAST mesmerizes audiences whenever she takes the center ring.

Performers in the Venardos Circus blend old-school entertainment with a modern twist on comedy, acrobatics, and song and dance.

2021 showman Kevin Venardos is the ringmaster and owner of Venardos Circus, where he puts his degree in musical theater to great use under the red and white big top.

LadyBEAST mesmerizes audiences whenever she takes the center ring.

It’s a cry that has thrilled boys and girls of all ages throughout America for nearly as long as our nation has existed. And the circus is here, in Asheville, now.

America’s circus history reaches back to 1793 when George Washington, among others, enjoyed the first performance of an American circus in Philadelphia, the art form having been imported from England a few years earlier. The circus persisted as a roving spectacle performed by small ensembles throughout America with the limited transportation of the day restricting where it could take place.

P.T. Barnum formed his own circus in 1871. The next year, he used the nation’s railroads to bring the circus to towns large and small across America.

In 1880, Barnum joined with James A. Bailey to form the “Greatest Show on Earth.” The circus was here to stay, and it became a major event for small-town America.

Barnum didn’t just set up a tent and sell tickets. He plastered the town with posters promising exotic animals and breathtaking performances in advance of the play dates. When his specially equipped trains arrived in town, they offloaded a variety of animals and performers for a spectacular parade that raised interest to a fever pitch.

In 1907, the circus merged with the Ringling Brothers to form a giant that defined the circus world for the next 150 years.

But the world changed and the three-ring circus centered around trained animals was slow to change with it. In 2017, the Ringling Brothers, Barnum and Bailey Circus folded its tent forever.

But the circus itself didn’t end, it evolved and in some ways returned to its historic roots as a small, intimate traveling show entertaining Americans in towns large and small.

In many ways, the Venardos Circus is the definition of the modern circus. To understand it is to understand its founder, producer and ringmaster, Kevin Venardos.

Venardos grew up just south of Manhattan in the small town of Montvale, New Jersey. While you might think that his folks taking him to the Ringling Brothers, Barnum and Bailey Circus may have planted the seed in young Venardos, that was not the case.

“I vaguely remember going to one show as a child, but it definitely was not part of our family tradition,” Venardos said.

In fact, as Venardos matured he set his sights on Broadway and graduated from Ithaca College with a major in musical theater.

Venardos wanted to perform; singing and dancing was an integral part of who he was. But Broadway is a tough act to break into, and two years later he was still unemployed. Then lunch with a friend outside the York Theater in New York brought about one of those Hollywood story events that one could never expect.

A theatrical agent walked by, stopped, looked at Venardos and asked, “Do you perform?” An affirmative answer led to a request for a head shot, which led to an interview at the Ringling Brothers Circus. It wasn’t Broadway, but it was an opportunity to sing and dance. Venardos was on the road to a new career.

He spent five years at Ringling Brothers perfecting his trade.

Taking the Show on the Road

But Venardos had a different vision of the modern circus, one that utilized more of his musical theater education, one that was a more intimate experience that appealed to adults, as well as children.

In the tradition of America’s entrepreneurs, in 2014, Venardos made a video that pitched a then non-existent circus that earned him a slot in the 2014 Los Angeles County Fair. In 2015, his act was booked into several county fairs, and in 2017, the Venardos Circus acquired its classic red and white tent and took to the road.

In 2019, the circus performed in 26 cities, including Asheville.

The Venardos Circus’ mission certainly includes entertaining, but it does it in a very special way. As the ringmaster puts it, “We work with small businesses to connect to smaller communities. We work together in a symbiotic way. We may partner with a shopping center or a family owned brewery, but whatever the venue, we try to make a measurable impact on the community.”

The one-ring circus is purposely designed to give the audience an intimate experience.

“When the audience arrives, a member of the cast takes their ticket and escorts them to their seat,” Venardos explained. “In the center of the tent, there is a stage upon which much of the performance happens. The size of the tent ensures that there are no bad seats.”

The circus performers also are the crew in this traveling tour, much like the original circus tradition.

There are no animals performing in the Venardos Circus, but there are performances high above the audience. There is comedy, but no clowns, and a lot of singing and dancing – the influence of Venardos’ Ithica College education.

“And you won’t want to miss LadyBEAST and her Houdini straight jacket performance,” Venardos said.

“We are thrilled to be back out on tour again, bringing smiles and joy to families and kids of all ages,” Venardos said. “Guests can expect to be transported back in time to the center ring of a centuries-old tradition, but one that we have tried hard to re-invent for a next generation while still tugging at the nostalgia of those returning to the circus.”

Inspired by the month, Venardos said that “Guests are encouraged to wear their Halloween costumes to shows Oct. 28 to 31 for our spooky spectacular performances, when our performers will adapt their costumes and other special touches to enjoy the holiday weekend even more.”

The Venardos Circus takes place under the red and white tent in the parking lot of the Asheville Outlets mall, 800 Brevard Road.

Remaining dates and times are:

General admission tickets are $27 adults; $17 for children under age 12. One babe in arms is admitted free with each paying adult; premium reserved seating is available for premium pricing. The show lasts approximately 90 minutes with one intermission.

Parking is free. Pre-show entertainment begins an hour before show time. Food and beverages are available for purchase.

"Guests are encouraged to wear their Halloween costumes to shows Oct. 28 to 31 for our Spooky Spectacular performances, when our performers will adapt their costumes and other special touches to enjoy the holiday weekend even more.”